“The suspected criminals that police killed and nabbed… were from a ‘holy war’ training group,” Xinhua said, citing an unnamed Urumqi police spokesman.

It said the eight men in custody had confessed to planning “terrorist” attacks against China’s majority Han population.

The report said several knives were found in the raid, but made no mention of any heavier weapons such as guns or explosives.

Chinese officials and media have reported several alleged plots blamed on Muslim Uighur separatists in the run up to the August Olympics.

Earlier this year police said they had foiled a plan to hijack an airliner and crash it in Beijing, while another plot was said to have involved kidnapping Westerners and journalists.

In another case in January, police in Urumqi said they had broken up a group whose leaders were planning to stage attacks in Beijing and Shanghai with toxic materials and explosives.

China has promised a massive security operation for the Olympics, with the authorities determined to ensure that the Games, seen as a showcase for modern China, are held without incident.

Beijing frequently accuses Uighurs separatists – some of whom it says have been trained by al-Qaeda – of running a violent campaign to bring about an independent state called East Turkistan.

However, human rights groups and exiled Uighurs say the government has fabricated or exaggerated the threat as an excuse to crush all forms of dissent in the region. 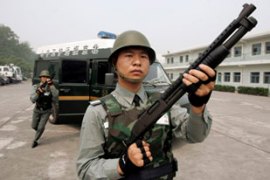 Uighur separatists in Xinjiang region accused of planning an attack on the Games. 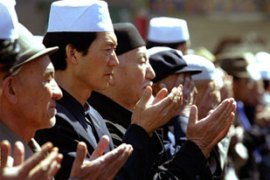 Alleged “plots” an excuse to crack down on Uighur minority, exiled leader says.