Salvage officials say the first part of the process will be to drill holes into the hull of the ship to collect water samples and determine if the pesticide, known as endosulfan, had leaked.

The ferry was believed to be carrying at least 10 tonnes of endosulfan among its cargo when it sank.

If the all clear is given, the hull will be pried open to remove the container holding the pesticide.

Al Jazeera’s correspondent in the Philippines, Marga Ortigas, said the divers hope to be able to remove the container by Wednesday.

The already slow-moving recovery operation was suspended last Friday after it emerged the vessel was carrying the chemical.

Officials believe the highly-toxic pesticide could threaten marine life and sicken rescue workers if it leaks into the water. 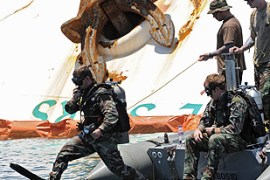