Five former surviving Khmer Rouge leaders have been charged with the deaths of about two million people as a result of starvation, disease, overwork and execution in Cambodia’s “killing fields”.

A detention order in November said Ieng Sary is being prosecuted for supporting Khmer Rouge policies that were “characterised by murder, extermination, imprisonment, persecution on political grounds and other inhuman acts such as forcible transfers of the population, enslavement and forced labour”.

Like other surviving Khmer Rouge leaders, Ieng Sary denied responsibility for any crimes and dismissed the charges as “unacceptable”.

On Monday the defence said Ieng Sary has a right to fair trial and should be placed under either house arrest or protective hospitalisation, and undergo proper examination to determine whether he is fit to stand trial.

“We cannot go forward on this very critical issue,” he said, adding that it is “a violation of equal protection”.

“I don’t believe that these are the so-called international standards that our friends, the prosecution, are advocating,” added Karnavas.

The UN-backed tribunal is expected to announce a new budget after ballooning costs put a strain on its funding.

The rise in cost is partly due to the sheer volume of pre-trial hearings to be heard by a joint panel presided by five international and Cambodian judges.

The initial budget was $56m spread over three years.

The Khmer Rouge’s former supreme leader, Pol Pot, known as ‘Brother Number One’, died in his jungle hideout in 1998.

Tribunal officials expect the trial process to last at least until 2011 but critics say the advanced ages and frail health of all the accused means that any sentences eventually handed down are likely to be little more than symbolic. 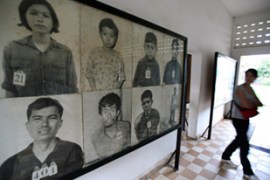 Lawyer says Khieu Samphan can now barely speak and is paralysed on one side.

Khieu Samphan’s lawyer refuses to proceed over translation of documents. 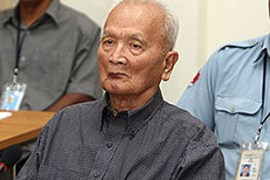