Apparently seeking to temper potential African hostility, Mugabe used his swearing-in to call for dialogue and heaped praise on the much criticised efforts of South African President Thabo Mbeki to mediate the crisis.

“It is my hope that sooner rather than later, we shall as diverse political parties hold consultations towards such serious dialogue as will minimise our difference and enhance the area of unity and co-operation,” Mugabe said.

So far there has been no consensus among the AU’s 53 member states, with the pan-African body issuing diplomatic statements and pushing for a power-sharing arrangement between Mugabe and Tsvangirai’s Movement for Democratic Change (MDC).

The Southern African Development Community (SADC), which has been leading mediation efforts to resolve the crisis, “are in consultation to put a text to the summit on how to end the Zimbabwe crisis, notably power-sharing possibilities,” a source close to the AU’s Commission said.

African leaders have warned that the crisis could destabilise southern Africa and that power cannot be handed entirely either to Mugabe or to Tsvangirai because of the country’s political polarisation.

“There is a need to bridge the gap,” Meles Zenawi, the Ethiopian prime minister said on Sunday.

Raila Odinga, the Kenyan prime minister and among Mugabe’s most vocal critics, has called on the bloc to send troops into Zimbabwe, and labelled the Zimbabwean leader “a shame to Africa”.

Desmond Tutu, South African cleric and Nobel Peace Prize laureate, said on Sunday that “a very good argument can be made for having an international force to restore peace” in Zimbabwe under UN  auspices.

A group of African lawmakers who observed Friday’s election run-off said the results should be scrapped and a new vote held.

George Bush, the US president, has ordered additional sanctions to beef up existing measures that include a travel ban on Mugabe’s inner circle and a freeze on their bank accounts. 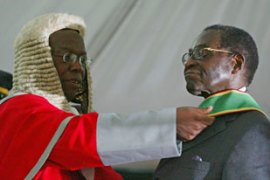 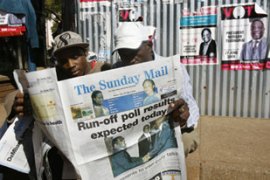 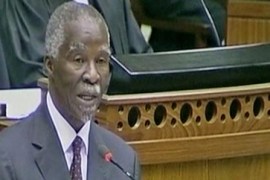 Foreign and regional powers are split on the Zimbabwe question. Mike Hanna reports on efforts to resolve the crisis.