Hamas says it retains the support of the Palestinian people despite facing an Israeli blockade on Gaza and an international boycott.

“If elections were to occur tomorrow, we would win,” Mahmoud Zahar, the co-founder of Hamas, the largest Palestinian Islamist resistance movement, told journalists.

“Support for Hamas is much greater than most people think.”

Ehud Barak, the Israeli defence minister, said recently that Israel has identified “signs of distress” coming from Hamas, the Haaretz newspaper has reported.
He said about 70 Hamas fighters had been killed during the last two months, and more than 300 killed during the past six months.

“Hamas is very stressed. The most effective action is the siege,” Barak said, referring to the Israeli-imposed economic blockade on the Hamas-ruled Gaza Strip.

Election ‘shock’ for US

Zahar, speaking during a visit to Doha, the capital of Qatar, said that no Palestinians, especially those in Gaza, would protest against Hamas.

“Palestinians know the pain of watching their land being confiscated, any force that will guarantee their right to return to a Palestinian homeland is one to side with,” he said.

For Zahar and Hamas, 2006 marked a watershed moment when Palestinians from the West Bank, Gaza and East Jerusalem won parliamentary and presidential elections described as “fair and free” by international observers.

the results shocked Israel and the administration of George Bush, the US president.

The US reacted by branding Hamas a “terrorist organisation” and lobbying for an international boycott of the organisation. 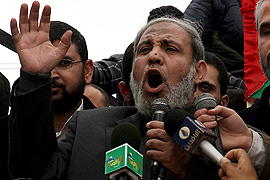 Mahmoud Abbas, the Palestinian president, formed a unity government in response, but its cabinet was later dismissed after inter-faction conflict involving his Fatah party which led to Hamas’s takeover of Gaza.

By June 2007, hundreds of Palestinians had been killed in months of factional street fighting.

“Last year was the first time for Palestinians to get themselves involved in civil battle,” Zahar said of the street battles.

He blames Fatah for allowing US foreign policy to steer their control over the West Bank.

In April 2008, Vanity Fair ran The Gaza Bombshells, an article that exposed a US plot to overthrow the elected Palestinian government based on leaked documents and interviews with key players in the Bush administration.

Leaning forward in his chair, Zahar said: “What came out from Vanity Fair was a perfect example of how regressive and harmful Fatah was in hurting the Palestinian cause.”

“So, we are not ready to meet with Fatah because such meetings should be fruitful and constructive for the Palestinian people.”

Zahar explains that the acts of aggression carried out by Fatah in Palestinian cities such as Ramallah went as far as the “killing of innocent people … or they shoot at students in university”.

“So, I can see how the Palestinian people in the West Bank would not vote for Fatah because of their co-operation with Israel”.

Zahar is also against normalisation with Israel as he believes that Israelis disrupt the integrity of the Arab world.

“Normally, after a peace process, peace is realised. Two remarkable examples, Jordan and Egypt were the closest in achieving peace with Israel.

“But nobody in Egypt is ready for normalisation with Israel because of their aggression toward the Palestinian people.

“We are not ready for it because it has nothing to do with serving the Palestinian cause.”

Brought up under Israeli occupation, Zahar was assimilated into a culture of resistance where self-defence came first.

In April 2003, his 25-year-old son Khaled was killed when Israeli forces destroyed their family home in Gaza.

His other son, Hussam, was killed in January this year by an Israeli air strike that also took the life of his son-in-law.

Zahar told an audience at the Doha Debates, the public forum for dialogue and freedom of speech in Qatar: “You don’t know what it’s like to look into your son’s chest and see that it’s empty.”

His sense of loss is not simply that of a father’s grief but also results from a strong feeling of dispossession triggered by “al-Nakba” – The Catastrophe – the 1948 creation of Israel and its expulsion of thousands of Palestinians from their homeland. 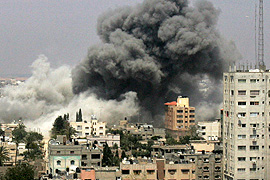 Zahar said: “I don’t resent the Jews or the Jewish faith.

“One must differentiate between Judaism and Zionism, and Zionists – they are the criminals.”

Before he became a leader of Hamas during the 1987 Palestinian intifada, or mass uprising, Zahar was drawn to the Palestinian struggle from a young age.

He was among more than 400 Palestinians who were forcibly deported in 1992 to southern Lebanon, where he spent more than a year in exile.

During his time there, he emerged as a powerful spokesperson for the newly formed Hamas movement.

After Hamas’ victory in the 2006 elections, he became foreign minister in a cabinet shunned by the West, which was demanding Hamas embrace the 1991 Oslo Accords which brought about the Palestinian Authority (PA) – under strict Israeli watch.

Zahar argues that, from the beginning, the PA had no real jurisdiction over the Palestinian land that was fragmented into three areas to allow Israel to have control over the region.

Under Oslo, the Israeli army retained their right to enter all areas under Palestinian authority if Israel deemed such intervention relevant for “security” reasons.

As a result, both the West Bank and Gaza remained targets for Israeli raids and military incursions.

Zahar argues that such an arrangement subjected the Palestinians to repeated “Israeli aggression”, prompting Hamas to defend themselves by “bombing local Israeli towns”.

Israel blames what they call “terrorist attacks” by Hamas and other Palestinian factions for the failure of peace negotiations that started in 1993.

However, Zahar dismisses Israeli statements as a pretext to blocking any chance for peace.

“This has become a recurring pattern. This is Israel’s policy now, and in the meantime, Palestinian lives are being affected,” Zahar said.

Like many Palestinians, Zahar has no faith in any Israeli declared commitment to establishing a Palestinian state alongside Israel.

Addressing Arab leaders in a recent meeting in Qatar, Tipsivi Livni, the Israeli foreign minister, said that Israel was ready for a two-state solution.

But Zahar believes Israel’s “solution” is a trick.

“Livni thinks we are ready to except two states- but where are the borders? Who is the citizen? We don’t trust statements made by Israeli officials,” he said.

“I have travelled through the tunnel of the Oslo Accords, the peace negotiations in Madrid, conferences in Paris, Sharm El Sheikh, Taba, everywhere you can think of. What two state solution is she be talking about?” he said.

Hamas opened indirect negotiations with Israel in Cairo earlier this year in an attempt to reach a truce and get the siege of Gaza lifted and were later joined by other Palestinian groups.

“Our agreement is based on two subjects.

“First comes the releasing of prisoners, then a ceasefire,” Zahar said.

Zahar explained 11,550 Palestinians are in prison and that one quarter of the Palestinian people have been imprisoned at some point in their lifetime.

Israel demands the halting of rocket attacks on Israeli towns and the release of Gilad Shalit, the Israeli soldier captured in Gaza during a cross border raid in June 2006.

“In the first go, 450 Palestinians would be released and then we would give back Gilad Shalit,” he said.

“But in the end, we know the Israelis are only playing games with us.

“Ceasefire for ceasefire, agreement after agreement, and in the meantime, they talk about releasing prisoners in one month – [then] no, two months. Then two years pass. So? Where are the prisoners?”

Hamas insists there will be no Gaza truce unless Israel lifts the Gaza blockade.

Zahar is infuriated by Israel and the west’s version of Palestinian history and speaks in a tone that demands the script be revised.

For Zahar, the history of the Palestinians should not be defined by the Israeli conquest, but by the continued Palestinian struggle to achieve their rights.

“Over the years, all that has changed in the meaning of the word Nakba is that we are nearer to achieving our goal after 60 years of struggle.

“We failed, but our grandsons will not.”