“The president today declared an emergency exists in California and ordered federal aid to supplement state and local response efforts in the area struck by wildfires beginning on June 20, 2008, and continuing,” the White House said in a statement.

Arnold Schwarzenegger, the governor of California, urged Bush on Friday to call a federal emergency, saying the fires were “of such severity and magnitude that effective response is beyond the capabilities of the state”.

“We have over 1000 fires burning in northern California alone, our resources are stretched extremely thin,” Cheri Patterson, a spokeswoman for Calfire, the state’s fire department, said.

“Our biggest concern is [that] we don’t have any of the fires under control.”

Patterson also said that while they were making progress to contain some of the fires, more thunderstorms were expected this weekend, including dry lightning later on Saturday that risked provoking more fires.

Around 265,000 acres of tinder-dry forest and parkland have been burnt across northern California, Schwarzenegger’s office said.

Schwarzenegger also warned that “federal assistance is necessary to save lives”.

California is frequently hit by scorching wildfires due to its dry climate, strong winds and recent housing booms which have seen housing spread into rural and densely forested areas.

At least 16 people have died in a wave of wild fires that has destroyed 1935 homes in California and scorched around 217,200 hectares of land. 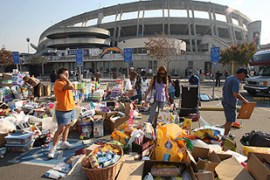 Nearly a million people abandon their homes as president declares an emergency. 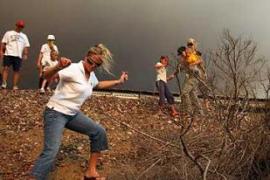