HRW compared the situation to what it said were rampant human rights abuses during the two wars in neighbouring Chechnya.

Russian security forces in Ingushetia have been combating fighters who are seeeking Islamic rule in the Caucasus.

The fighters have staged frequent attacks on police and local authorities in the area.

HRW warned in the report that the “dirty war” tactics against the fighters was likely to further destabilise the situation in Ingushetia and beyond in the North Caucasus.

A blast in a southern Russian province bordering Chechnya has killed at least one man and wounded three more, including the local prime minister. 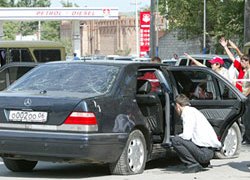 Two bombs have exploded on a roadside in the mostly Muslim republic bordering Chechnya, wounding its prime minister in an apparent assassination attempt.

Five people died in fresh clashes in Ingushetia, a Russian province next to Chechnya where nearly 100 people were killed last week in attacks.

The United Nations has voiced concern at reports of arbitrary detention and torture of women in Chechnya.