“It has been agreed in the negotiations that beef from US cattle more than 30 months old should not be exported to South Korea until consumer confidence is restored,” he said at a news conference in Seoul.

Chung also confirmed a ban on the shipments of parts such as heads, spinal cords, small intestines and tonsils which are deemed likely to harbour the disease.

He was accompanied at the news conference by Kim Jong-hoon, the trade minister, who has held intensive negotiations in Washington with Susan Schwab, the US trade  representative.

Kim said the two sides will introduce an age-verification system for beef exports.

However, an April agreement that reopened South Korea’s market to American beef included no age restrictions.

Older cattle are seen as potentially more at risk from the disease.

Lee Myung-bak, the South Korean president, is facing a growing crisis over his government’s agreement in April to resume the beef imports, suspended since 2003 after a case of mad cow disease in the US.

The pact to resume imports has not yet gone into force because of the protests, despite both government claims that the meat is safe.

The deal was made in an effort to halt daily demonstrations in South Korea over the past month that have brought tens of thousands of protesters to the streets and threatened the stability of  Lee’s government.

Lee replaced his new chief of staff and seven other senior presidential secretaries on Friday in a bid to soothe public outrage over plans to resume the imports.

The entire cabinet also has offered to resign over the beef issue, but the president has not yet said which ministers will leave the government.

A coalition of civic groups that have organised the protests said they would keep rallying against Lee and only a complete renegotiation of the April beef deal could resolve the turmoil.

Lee took office in February after a landslide election win on promises he would strengthen ties with the US and reinvigorate the slowing economy.

The beef debacle, however, has caused his popularity to plummet.

Weeks of anti-government protests climaxed last week with a candlelight rally that drew some 80,000 people. 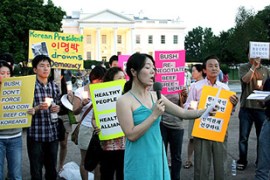 US unwilling to budge on beef deal 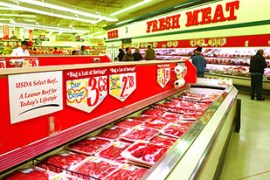 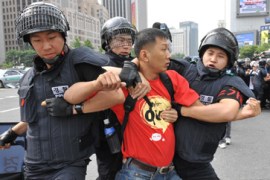 South Korean leader under pressure to resign amid anger over US beef imports.