As paramilitary police kept a close watch, the flame from the torch was mixed with a special flame that was carried to the top of Mount Everest, the world’s highest peak, during an earlier leg of the lengthy relay.

According to an AFP photographer at the scene, the area was cordoned off to everyone except those given special passes to attend the relay.

A crowd that had been carefully selected by the authorities cheered the event in front of the palace, the end point of the relay.

Many locals were told to stay at home, and shops along the relay route in the remote Himalayan city were closed to the public.

The entire event, scheduled to last for three hours, ended after less than two.

No immediate explanation was given for the shortened period.

Human-rights groups labelled the event as “provocative”, while pro-Tibet activists argued that the leg should have been cancelled in the wake of the March unrest.

Slogans on billboards and village walls in Lhasa welcomed the Olympics and urged locals not to cause trouble for the relay.

“Protect social order and stability,” read one sign, while another urged Tibetans to “Harmoniously greet the Olympic Games”.

Tibet Autonomous Region is still closed to foreign tourists and foreign journalists have been allowed to visit only as part of closely monitored government tours.

Chinese officials claim that the Dalai Lama was behind the March unrest and accused him of planning to upset the passage of the torch through Lhasa.

“The Tibet independence forces have indeed been engaged in activities to sabotage the Olympic torch relay in Lhasa,” Baima Chilin, a vice-chairman of Tibet’s government, said before the relay.

The Dalai Lama has denied that he is planning to disrupt either the torch relay or the Beijing Games in August.

“Since this is a proud moment for the people of China, the Dalai Lama has appealed to Tibetans not to protest,” Tenzin Taklha, a senior aide to the Dalai Lama, said from Dharamsala, the home of Tibet’s government in exile, in northern India.

Tibet has been under a security clampdown since peaceful protests on March 10 to mark the anniversary of a 1959 uprising against China’s rule of Tibet escalated into widespread violence across the city on March 14.

Exiled Tibetan leaders say at least 203 people died in the crackdown, while China has reported killing one Tibetan “insurgent” and said “rioters” were responsible for 21 deaths.

The crackdown sparked international protests that dogged the torch’s month-long global journey in April, before it arrived in China ahead of the Beijing Olympics in August.

That unrest spilled over into other parts of China with Tibetan populations. 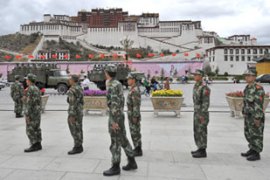