The Iraq war re-appeared on the American political stage this week, as the fifth anniversary of the invasion came and went.

Republican presidential hopeful John McCain, who has staked much of his credibility as a presidential candidate on his mastery of foreign affairs and support for the war, took a taxpayer-funded trip to Baghdad ostensibly to do some senatorial fact finding, but in reality to highlight his foreign policy gravitas.

However, McCain’s visit didn’t go according to plan.

Embarrassingly, he mixed up the nation’s Sunni and Shia warring factions, publicly stating not once, but twice how concerned he was about al-Qaeda fighters being trained and equipped by Iran.

Iran? Why would the Shia Islamic Republic help out Sunni fighters who have massacred Shia Iraqis and bombed Shia holy shrines?

Fortunately for the senator from Arizona, his traveling buddy and fellow pro-war senator Joe Lieberman was on hand to correct McCain’s gaffe. He leaned forward and whispered in McCain’s ear and McCain hurriedly corrected himself.

Unsurprisingly, McCain’s shaky grasp of the complexities of the war in Iraq – his signature issue, remember – got only a fraction of the critical media attention that was lavished on Barack Obama’s efforts to explain and distance himself from racially-charged sermons by his Chicago church pastor, Reverend James Wright.

Wright’s sermons, in which he condemned America as a racist society, have been playing in a continuous loop on cable news shows.

Obama gave a widely-hailed speech about race in America on Tuesday that many commentators called the first effort by any major American politician to address the issue in a grownup way in many decades.

But here’s an interesting question: Why do Obama’s pastor’s remarks get nonstop play, while no-one talks about the prominent evangelical preacher Reverend James Hagee from the southern state of Texas, who has strongly endorsed McCain?

Hagee runs a hugely profitable mega-church in the Texan city of San Antonio and specialises in rants denouncing the Catholic Church – which he calls a “white whore” – as well as the usual fundamentalist gay bashing.

But you don’t see his sermons on US networks such as MSNBC or CNN, nor do you see McCain distancing or disavowing his friend Hagee.

Nor is McCain being grilled for his association with the Reverend Rod Parsley of Columbus in the midwestern state of Ohio.

McCain called Parsley a “spiritual guide” for America, but Parsley is a rabid Muslim-hater who calls for the destruction of Islam.

He writes: “America was founded, in part, with the intention of seeing this false religion destroyed, and I believe September 11, 2001, was a generational call to arms that we can no longer ignore.”

The US news media and political punditry consistently gives McCain a free pass when he associates with hate-mongers like Parsley and Hagee in order to win votes from their right-wing followers.

n Wednesday, the anti-war protestors were back on the streets of Washington DC to mark the war’s fifth anniversary.

They were mostly young people, college or even high school-aged. They must be the little brothers and sisters of the kids who marched back in 2003.

Their numbers were small. I think that is because Americans have realised that no matter what they say, do, or vote, George Bush, the US president, is going to keep his war going until he is safely out of office.

I remember being in New York in early 2003, among hundreds of thousands of marchers and protestors who literally filled block after city block.

But those numbers meant nothing to Bush then, and the fact that the overwhelming majority of  Americans think his war was a mistake means nothing to him now, either.

The perfect illustration of this utter disregard for the will of the people was provided by the inimitable Dick Cheney.

When the vice-president was asked what he thought of a new poll showing 64 per cent of Americans think the war isn’t worth fighting, Cheney replied: “So?”

Bush went to the Pentagon on Wednesday to give a speech that was breathtaking in its vapidity.

Most of the phrases and slogans could have been lifted from any number of speeches the president has given in 2003, 2004, 2005 and so on.

He once more congratulated himself for being so perspicacious as to see the need for a “bold strategic change of direction” – in other words, the so-called “surge”, as though the blood-soaked chaos that preceded the surge was someone else’s doing.

He spoke of “victory”, without definition. He described the war as “noble”, truly a term that can only be used by those who have managed, like Bush, to avoid seeing what war really is like up close.

Sometime soon, the death of the 4000th US service man or woman in Iraq will be recorded.

This week I had the privilege of spending time with Amanda Jordan, whose husband Philip, a US Marine gunnery sergeant, was killed in the opening days of the war on March 23, 2003.

Five years later, she said, the pain of that loss has not ebbed for her or her 11-year-old son.

“We just do it one day at a time try to get through each moment, each hour, and each day,” Mrs Jordan said.

“The fact [is] that my husband’s not here, and [I’m] dealing with it with my son and the [the fact that there are] times that other kids at school have their fathers there for something and he’s not there.

“Sometimes we have a day that is just consumed by the fact that he’s not here, and other days we make it through the day and we’re … OK.”

Mrs Jordan agreed to be interviewed by Al Jazeera even though she is very much in favour of the war effort, and she is a big supporter of Bush, whom she has met personally several times.

But each of the 4,000 deaths of Americans in Iraq – and of the many more thousands of Iraqis killed – has created widening ripples of grief and pain, that go on through time and through generations. 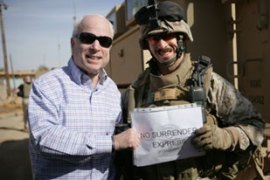 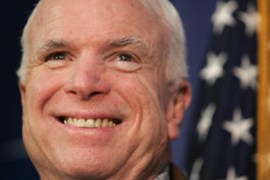 US Republican presidential candidate on fact-finding mission to Iraq. 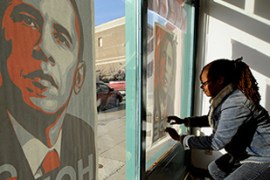