“All the funds raised were used for campaigning in those elections I took part in and to cover deficits accumulated during previous election campaigns I had taken part in.”

But some Israeli lawmakers said the new police investigation – the fifth opened into Olmert’s activities since he took office in 2006 – was reason enough for him to leave office.

“At this moment, the prime minister’s attention isn’t on matters of state and on running the country, and he’s not worthy to lead the country,” Gideon Saar, a lawmaker from the opposition Likud Party told Israel Radio on Friday.

Similar calls have come from inside Olmert’s governing coalition.

Shelly Yacimovich of the Labor Party, a junior partner in the government, said Labor “cannot remain in the same coalition with a prime minister tarnished by such deep corruption”.

The Labour party’s departure, although apparently only a remote possibility, would bring Olmert’s government down.

The details emerged after police lifted a week-old media gag order as Israelis enjoyed festivities marking their independence day and the 60th anniversary of the founding of their state.

Talansky said in Jerusalem he had given evidence to police after he came to Israel last month to visit relatives for the Passover holiday, saying: “I never was involved in politics. 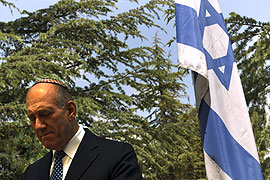 “Everything is okay. I don’t understand what’s the big thing.”

Official documents show Talansky was treasurer of a charity, the New Jerusalem Foundation, which Olmert set up in 1999.

Reading a statement in a nationally televised speech late Thursday, Olmert denied the charges. He said a lawyer handled his finances and insisted everything was legal.

Yoel Hasson, a lawmaker from Olmert’s party, said, “I certainly accept his version of events.”

“You don’t topple and replace governments or prime ministers because of allegations and investigations,” Hasson said.

Doubt over Olmert’s future is likely to upset US-sponsored peace negotiations with the Palestinians and will overshadow next week’s celebratory visit to Israel by George Bush, the US president.

The White House said the case would not alter the US president’s planned visit to Israel next week, calling the investigation “a matter for the Israeli judicial system”.

Olmert, who was elected prime minister in 2006, has been a suspect in several corruption affairs involving property deals and political appointments.

Mike Hanna, Al Jazeera’s correspondent in Jerusalem, said: “The Israeli prime minister has been at the centre of several corruption investigation in the past, at least two of them still on going, but no charges have been brought against him at any state.”

Legal sources say the process of bringing an indictment could take months rather than weeks. Meanwhile, “Olmert’s political opponents insist the country can not afford a distracted prime minister for an interdeterminate period and are demanding that he resign now,” Hann said.