Rubbish sacks
Berlusconi, who secured a third term as premier in April, is also set to announce tax cuts to help Italians weather an impending recession in the euro zone’s third largest economy.
However, locals in Naples are looking for more urgent solutions to their refuse-collection crisis which has reached crisis levels in recent months, choking the streets, fouling the air, making children ill and scaring away tourists.

There were demonstrations in the city on Wednesday as locals vented their anger over the problem at the arriving politicians.

Waist-high piles of rubbish sacks have been set on fire by locals fed up with authorities’ inability to clear the streets.

The problem is complicated further by the involvement of the “Camorra” or local mafia in illegal disposal of toxic waste.

As Berlusconi’s ministers gathered in the city, Raffaele Rusciani, a local architect, said he doubted they could provide a miracle cure, beyond the quick clean-up of the city centre in readiness for Wednesday’s government guests.

He said: “Our problems can’t be fixed from one day to the next. We’ve been dealing with this garbage for the last 15 years and I don’t expect anything to change in any real way soon.”

Rosaria Crispina, who runs a shop selling lottery tickets and cigarettes, said she saw the cabinet meeting as a publicity stunt.

“Coming to Naples was all about appearances,” she said.

Naples has also been the focus of a violent backlash against illegal Roma camps depicted by many right-wingers in Berlusconi’s new government as areas of criminality.

Last week, police evacuated one camp after local people set fire to shacks over news reports of an apparent attempted kidnapping of an Italian baby by a Roma girl.

A similar case of alleged baby-snatching was reported in Sicily this week, with a young Roma couple arrested. 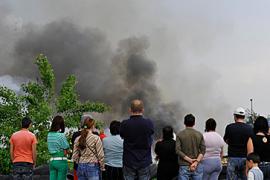 Roberto Maroni, Italy’s interior minister, is set to present the cabinet with a number of measures to tackle the issue.

These are likely to include making illegal immigration a jailable offence, longer sentences for immigrants who commit crimes and tough new border controls.

A draft seen by the Reuters news agency included measures apparently aimed specifically at the Roma such as making it a crime to make children beg, punishable by up to three years in prison.

Thomas Hammarberg, the Council of Europe’s commissioner for human rights, criticised the planned package saying “arrests should be used against criminals, which immigrants are not”.

“I have written to the Italian government. I believe that politicians shouldn’t inflame this situation,” he said.

Meanwhile, Vladimir Spidla, the European employment commissioner, said Brussels would scrutinise the new laws, warning against “any type of racism or xenophobia”.