He is preparing new laws to screen immigrants and jail or expel those breaking the law.
Illegal entry
Those arrested came from Eastern Europe, Greece, North Africa and China and face charges ranging from illegal entry into Italy to prostitution, drug-trafficking and robbery.

Francesco Gratteri, the policeman in charge of the operation, said that the sweep “wasn’t aimed at any specific category or ethnic group”.

“The sole objective were criminals who have caused a sensation of rising alarm in society,” he said.

The focus of Italian concern about immigrant crime are the Roma, known in Italy as “nomads”, who come mainly from Romania and other Eastern European countries.

During the operation, police in Rome raided the biggest Roma camp there and took away about 50 men for questioning.

The arrests coincided with a visit by Cristian David, Romania’s interior minister.

Romania has Europe’s largest Roma population and its prime minister said this week that Italy’s crackdown could cause “xenophobia” against other Romanians.

Italy has tried to reassure the fellow European Union member that Romanians are not being targeted.

The two countries have launched a joint police effort. Romania will dispatch 15 officers to work with Italian police this month.

Meanwhile, Italy’s interior ministry said that police in Libya have arrested 240 would-be illegal migrants from several African countries over the past four days as they prepared to sail to Italy,

Libya is a springboard for hundreds of thousands of Africans trying to reach Europe via Italy on board unseaworthy boats.

In a sign of the tensions surrounding the issue, an illegal Roma camp in the Ponticelli neighborhood of Naples had to be evacuated by police on Wednesday. 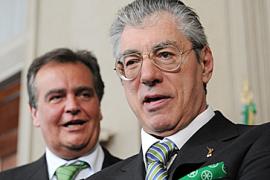 During the incident, in which nobody was injured, local people, angry at an alleged baby-snatching case involving a 16-year-old Roma girl, set fire to their shacks repeatedly during the night.

She said: “The hundreds of Romanians who lived here have gone into hiding, some under police protection.

“We understand there were several arrests made, and the girl who was allegedly responsible for the kidnapping is in police custody.

“This will only add to tensions which already exist between the Italians and the Romanian community here in Italy.”

Commenting on the events in Naples, Umberto Bossi, leader of the anti-immigrant Northern League party, said: “People do what the political class can’t manage.

“This operation against illegal immigrants is good because it’s what people want. They ask us for security and we have to give it to them.”

Meanwhile, Roberto Maroni, Italy’s new interior minister and a member of the party, has announced that he is to rush out emergency laws to bring back passport checks on Italy’s EU borders, despite its membership of the Schengen passport-free zone.

He also wants to make illegal immigration a jailable offence and speed up the deportation process.