Iraq has started to import vegetables for the first time in its modern history despite ample water, fertile land and a rich farming heritage stretching back to more than 7,000 years.

The war, lack of resources and new market realities in post-Saddam Iraq are to be blamed for this break from tradition.

A post-war free market system is pushing Iraqi farmers out of competition. Cheaper goods, such as Syrian vegetables, have flooded local markets.

Hasan al-Shammari, a farmer from al-Latifiya, 40km south-west of Baghdad, said: “Traders looking for larger profit have destroyed our business, because they make more money when they import vegetables and the government is doing nothing to protect the Iraqi farmer.”

Officials at the Iraqi ministry of agriculture were unavailable for comment. 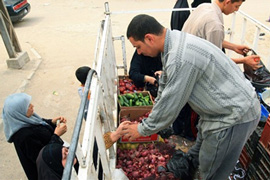 The agriculture sector has also had to contend with rising fuel prices and shortages as they require benzene to run irrigation pumps. Though Iraq has large oil reserves, a debilitated oil industry has been unable to meet local needs.

“One of the main problems facing farmers in my area is the fuel for water pumps. Fuel in Iraq is very hard to get, and if you manage to get it, you would pay a fortune,” Akram Abu Hussain, an Iraqi journalist from al-Latifiya, said.

Al-Shammari adds that farming overheads has been steadily increasing.

While gasoline and petrol prices did not exceed one cent per litre prior to the US-led invasion in 2003, they are now sold for about 750 Iraqi Dinars per litre (around 65 cents).

“In the past fertilisers were subsidised, but now we have to pay more than one million dinars around $830) per tonne. We cannot get water through the normal water network anymore which makes farming itself harder than usual,” he said.

“As we are now unable to compete with imported vegetables, we have stopped farming.”

But other farmers say lack of security, especially on the highways, is a greater concern.

Zamil al-Qaraghuli, a farmer from Baqouba, 65km north of Baghdad, said: “We stopped growing vegetables because first of all many farmers have been robbed and killed while delivering their produce to the cities.”

While some farmers have turned to the militias for protection, others have joined them.

Amir Mahmoud, a grocer in Baghdad, said many farmers have abandoned their trade “because if they join the militias they get much more money than farming, so why bother.”

“Several of my Iraqi vegetable providers, have joined al-Sahwa (US-backed militias in Sunni areas), where they get more money, especially if the family has more than one adult male member.”

Al-Shammari acknowledged that several members of his family have left farming to join al-Sahwa for a more dependable income.

“Those who joined al-Sahwa are mainly farmers and owners of small ranches. Many of them were left with no option, either they starve or join al-Sahwa. We farmers do not know any other trade or profession other than farming, but because every male had to join the army at some point in the past, we know how to fight, so al-Sahwa was our only resort,” he said.

However, Thamir al-Tamimi, a key founder of al-Sahwa played down the notion that farmers have abandoned their fields to join the tribal militias.

“Al-Sahwa pays $300 per month to each fighter; 75 per cent of our personnel are volunteers, 25 per cent only receive salaries. I do not think this amount is such a temptation for a farmer to desert his field and join al-Sahwa,” he said.

Al-Tamimi said real money could be made by joining the Iraqi police and army.

“Salaries are around $600 a month in the police and army,” he said.

When contacted for comment on the influx of farmers into the security forces, Ali Al-Dabagh, the Iraqi government spokesman, declined to comment.

Iraqis are known to be finicky about their food and the imported farm products have left many an Iraqi housewife frustrated.

Shaima, who refused to disclose her last name when contacted over phone, said using imported vegeteables had not only strained the family budget but also affected their taste buds.

“Everybody here misses our local fresh vegetables. I think it is about soil and quality of water, the vegetables we are getting from outside Iraq do not taste the same. My cooking is not like before because of that.”

Suad, 52, a retired teacher who again did not want to disclose her last name, bemoans the loss of a way of life: “Apart from their taste which is not anything like our local vegetables, imported vegetables are expensive.”

“We buy them in boxes, and most of the times their  bottoms are damaged. What was good about our local vegetables was that we got to pick each piece by our own hands; and it used to be direct from farm to the local vendor.”