From Washington, Condoleezza Rice, the US secretary of state, reaffirmed backing for Fouad Siniora, the Lebanese prime minister, and said the US would “provide the support needed” to help him deal with Hezbollah’s actions.
The reactions came after Hezbollah and its Amal allies – both mainly Shia groups – took over Beirut’s Muslim sector, including almost every position and strategic building held by supporters of the March 14 coalition.

In video:
James Bays reports on the clashes in Beirut

By evening, clashes were reported from the southern city of Sidon and Hezbollah fighters were in control of Beirut’s main Al-Hamra shopping street.

Government forces began taking up positions in some neighbourhoods in west Beirut abandoned by the pro-government groups.

An opposition official said the roadblocks placed by its supporters would not be lifted until the government rescinded its measures against Hezbollah and sat down for a national dialogue.

Another opposition spokesman threatened to attack what he described as the security centres of Walid Jumblatt, leader of the mainly Druze Progressive Socialist Party and a prominent Siniora ally, in the Chouf region of Mount Lebanon.

In a statement to Al Jazeera, Weam Wahab, a former Hezbollah minister, ordered the Lebanese army command to take control of the areas by Friday night, otherwise he would act to remove them shortly.

Sharp escalation
Street battles, which first erupted in Lebanon on Wednesday, have now left at least 12 people dead and more than 20 others wounded.

Tension between the government and Hezbollah sharply escalated when the cabinet said the group’s private phone network was illegal and an attack on the country’s sovereignty.

A woman and her husband were reported killed in Sidon and another woman in Bar Elias, in the Bekaa Valley, during Friday’s clashes.
Two people were killed and two others wounded earlier in the town of Khaldeh, south of Beirut.
“There was a confrontation between Sunni supporters of the majority bloc and fighters loyal to Talal Arslan [a Druze opposition politician] … two people were killed and two others were injured,” a Lebanese security official said.

He said that those killed were supporters of Arsalan.

TV office set alight
In Beirut, a building belonging to the Future TV network, owned by Saad Hariri, a prominent pro-government politician, was set alight by opposition supporters.
The attack came after a rocket-propelled grenade struck the fence of the heavily protected residence of Hariri in the suburb of Koreitem, a Muslim area of western Beirut.
Hariri, leader of the Future bloc, the biggest partner in the March 14 coalition, was believed to be inside at the time but unhurt.
Earlier, armed men loyal to Hezbollah had forced Future News, the news channel of the Future media group, off the air in Beirut. 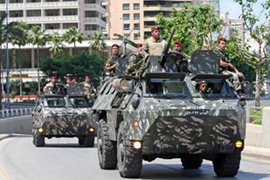 Against this backdrop of escalating tensions, Lebanese politicians appeared to be hardening their positions, at least judging by their statements.
Reading out the governing coalition’s statement on Friday, Geagea said what has happened is an armed coup against the constitution and the Lebanese state – one that has de-legitimised the weapons of Hezbollah.
The Lebanese army should intervene to protect the lives of Lebanese people, he said.
Plea for help
Geagea called on the moderate forces in the Arab world to intervene to pressure Hezbollah to reverse its coup, and the international community not to stand still.
He also reiterated the March 14 coalition’s support for the Siniora government.
Geagea’s condemnation of Hezbollah’s actions was preceded by a statement from Amin Gemayel, leader of another government ally, the Kataeb, a mainly Maronite Christian party.

Gemayel urged Christians to stay away from the fighting and accused Hezbollah of staging a coup.

Separately, Jumblatt, the leader of the pro-government PSP, said in an exclusive interview with Al Jazeera’s Rula Amin, that he did not regret his backing for the removal of the head of security of Beirut airport, whom the government accused of being too close to Hezbollah.

From the other side of the political spectrum, Michel Aoun, a Christian leader allied with Hezbollah, said that normality should be restored on the streets. 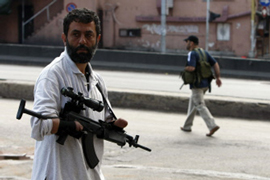 On the diplomatic front, Saudi Arabia and Egypt have called for an urgent meeting of Arab foreign ministers to try to halt the violence.

“An emergency meeting of Arab foreign ministers in Cairo to discuss the crisis will be held in two days,” Hossam Zaki, the Egyptian foreign ministry spokesman, said on Friday.

Al Jazeera’s Mike Hanna, reporting from Jerusalem, said: “The Israeli government does not view the current situation as a threat, but sees it as an internal matter.