Prachanda, the Maoist leader, called on his party activists to remain calm during polling.

“The need of the hour is to show restraint and have a fair and free election,” he said in a statement after meeting Girija Prasad Koirala, Nepal’s prime minister.

Prachanda has accused security forces of plotting to undermine the elections in order to save King Gyanendra from losing his throne.

The assembly’s first tasks will to abolish the monarchy and rewrite the constitution.

King Gyanendra, viewed by supporters as the incarnation of the Hindu god Vishnu, the protector, also made a rare public statement.

“We call upon all adult citizens to exercise their democratic right in a free and fair environment,” he said.

In the latest death of the campaign, one protester died when police have opened fire on demonstrators angry at the slaying of an election candidate the previous day.

Ram Kumar Khanal, an area police chief, said the police had opened fire with live ammunition in order to disperse protesters who were smashing stores and buses.

A new polling date will be chosen in about a week for the constituency in Jahare Bazar town, Binod Kumar Pokhrel, an election official was reported by the Associated Press as saying.

On Tuesday, six former Maoist rebels were shot dead by police during clashes with supporters of the rival Nepali Congress party in Dang district, 300km west of Kathmandu.

Campaigning has also been marred by reports of intimidation by Maoist loyalists, many of whom have failed to adapt to civil life after years spent fighting government forces.

Al Jazeera’s Jane Dutton, reporting from Kathmandu, said the situation was tense across the country ahead of the polls.
“There has been an escalation in violence prior to the elections,” she said, adding that there had been at least four bomb explosions in the capital in recent days.
Dutton also reported there would be 136,000 police on the streets during the elections and that travel bans and a ban on the sale of alcohol would also be imposed.

Bhoj Raj Pokhrel, the chief election commissioner, said: “we are all concerned regarding election day violence”.

The European Union, which has sent a 120-strong election observation team, repeated calls for a violence-free election.

“I call again on all those involved in the election to respect the fundamental right of every Nepali citizen to cast their vote on  April 10 in a peaceful atmosphere without fear of intimidation or violence,” Jan Mulder, the chief observer, said.

The elections are the first since a peace deal brought Nepal’s Maoists fighters into mainstream politics and ended a decade-long civil war in which at least 13,000 people have died.

The 27 million people of the Himalayan nation between India and China will be hoping that the election can bring peace and prosperity.

“We have no choice but to be hopeful,” Biraj Shresthra, a 43-year-old who runs a Kathmandu electronics shop, said. “We’ve seen so much fighting. Maybe now it will stop.” 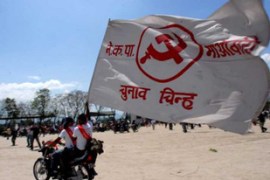 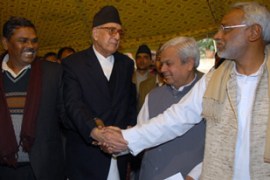 Nepal strike comes to an end

Ethnic group UDMF and government agree on representation for the Mahadhesi group. 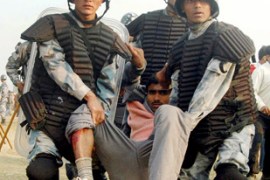 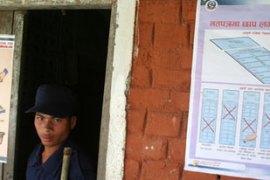 Leaders call for calm after series of killings ahead of landmark election.