Proceedings were interrupted on several occasions by heckling from anti-war protesters, one of whom shouted “bring them home”, referring to US troops, before being escorted from the room.
Criticism of Iran
Petraeus said that after the 45-day period the US would “commence a process of assessment to examine the conditions on the ground and, over time, determine when we can make recommendations for further reductions”.

The general also continued to criticise Iraq’s neighbour, Iran, for supporting and training Shia fighters in Iraq through cells the US army describes as “special groups”.
“Unchecked, the special groups pose the greatest long-term threat to the viability of a democratic Iraq,” Petraeus said.
Recent violence in Iraq between Shia militias and Iraqi security forces has left hundreds of people dead, while on Tuesday Muqtada al-Sadr, the Shia leader of the al-Mahdi army, threatened to lift a ceasefire he put in place last August.
At least nine US soldiers have been killed in Iraq since Sunday.
Petraeus criticised the recent Iraqi operation against Shia militias in the southern city of Basra as “not adequately planned or prepared”.
Marwan Bishara, Al Jazeera’s senior political analyst, said Petraeus had in effect been allowed to judge his own progress on the situation in Iraq.

Meanwhile, Crocker said that the US is negotiating a long-term agreement with Iraq that would give a legal framework for American troops to remain in the country.

The move has sparked criticism from some Democrats who say it would shift the burden of the war on to the next US administration.
But Crocker said “the agreement will not specify troop levels, and it will not tie the hands of the next administration”.
“[The next US president] arrives in office with a stable foundation upon which to base policy decisions.”
Democratic anger
The recent spike in violence in Iraq has also thrust Iraq to the forefront of campaigns for the US presidential election in November.

The White House and members of the Republican party say the “surge” has successfully lowered violence and argue a pause in troop withdrawals to previous levels provides the means to assess the results of the reinforcements.

John McCain, the likely Republican candidate, told the Senate Armed Services Committee before Petraeus’s testimony on Tuesday that “much needed to be done” but said it was possible to “talk with real hope and optimism about the future of Iraq and the outcome of our efforts there”.

However, Democrats criticised Petraeus’s plan to halt withdrawals, saying the “surge” had not yielded sufficient political progress in Iraq and no end to the conflict was foreseeable.

Both Democratic presidential hopefuls, who were present at Petraeus’s testimony, said the current Iraq strategy was not working, with Hillary Clinton telling the general that it was time to withdraw US troops, saying the situation in Iraq remained tenuous.
“It might well be irresponsible to continue the policy that has not produced the results that have been promised time and time again,” she said.
Barack Obama said the US needed to talk to Iran to help stabilise the situation in Iraq.
“I do not believe we are going to be able to stabilise the situation without that,” said Obama, adding that a plan for US troop withdrawals was needed to force Iraqi politicians to work together.
“I think that increased pressure in a measured way … includes a timetable for withdrawal. Nobody is asking for a precipitous withdrawal.”
Source: News Agencies 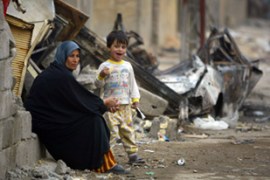 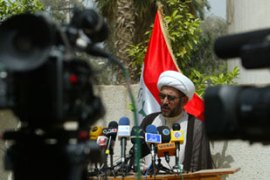 Iraqi and US forces increase pressure on al-Sadr to disband his al-Mahdi Army. 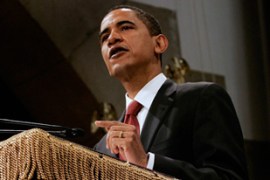 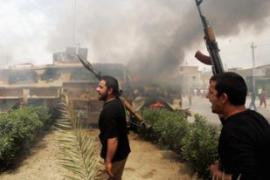