Five years ago, Iraqis watched in horror as the city they called “Baghdad the beautiful” was bombed.

Behind the plumes of smoke, George Bush, the US president, promised the world that he was pursuing regime change to unseat the dictator Saddam Hussein who had weapons of mass destruction and was linked to al-Qaeda.

The US president also promised Iraqis a new era of peace, prosperity, liberty and freedom.

Five years later, with no weapons of mass destruction found and claims of al-Qaeda links unsubstantiated, Iraqis are still waiting for stability to return to their country.

Successive investigations into pre-war intelligence claims have revealed that Iraq had neither the capacity nor the capability to produce weapons of mass destruction.

David Kay, a US weapons expert and chief of the team searching for the illicit weapons, found no such activities. In 2005, he concluded that Iraq was not in possession of such weaponry at the time of the invasion.

And as evidence revealed that Iraq never had ties with al-Qaeda – its ideological enemy – the notion that Saddam Hussein posed an imminent threat to the West also crumbled.

Some media treat March 19, 2003 as the beginning of the war, but the conflict for ordinary Iraqis never ended in March 1991 following Iraq’s defeat and exit from Kuwait.

They would endure 12 years of punitive sanctions which the UN estimates killed nearly 1.7 million Iraqis.

Though the sanctions were removed following the fall of Baghdad, the reprieve Iraqis had been hoping for would be a long time in coming.

With the Iraqi army disbanded and the police poorly-trained and equipped, Iraqis would witness the severity of the wanton violence that sectarianism would create.

And for the first time in Iraq’s history, Islamic fanaticism would rear its ugly head thanks to the constant stream of terrorists pouring across Iraq’s poorly defended borders from countries known to be US allies.

They would bring to Iraq a brand of religiosity entirely foreign to the once secular society.

TV screens were festooned with military experts, analysts from various institutions and think-tanks, and so-called Iraqi exiles who spoke of how quickly Iraq would fall.

But none of them spoke of how to rebuild Iraq. In fact, the budgeting – a $50 billion price tag according to Dick Cheney, the US vice-president – did not factor in how to rehabilitate a country decimated by 12 years of economic sanctions.

Nor how to build grassroots democratic institutions and address the need for national reconciliation.

The post-war planning that did exist was restricted solely to embedding Iraqi exiles – many of whom lived in London, Washington and Tehran – to take the seats of power once Saddam Hussein was overthrown or killed.

This plan entirely erased the valuable input of a secular Iraqi intelligentsia that should have been given the reins of power.

Those who could, fled for their lives – to the order of some 4.5 million Iraqis now begging for jobs on the doorsteps of western and Arab countries.

As a result, the very institutions which could have rebuilt Iraq were now virtually devoid of the expertise and talent needed for such an endeavour. Sectarian militias quickly filled the gap and seized control of vital ministries.

Without the technocrats, which kept Iraq running for decades, the government, the parliament and the ministries have been paralysed to the point of bickering endlessly over the most mundane of issues, such as the colours of the Iraqi flag, while dozens of civilians are killed every day.

Nevertheless, Iraqis today still pin their hopes that the worst is over. In some areas of Baghdad, families are picking up the pieces, returning home and reopening their shops and businesses.

With fragmented progress reported in some provinces – Al-Anbar’s economy is thriving as the guns fall silent in Fallujah and Ramadi – Iraqis are looking forward to the elections planned for 2009. 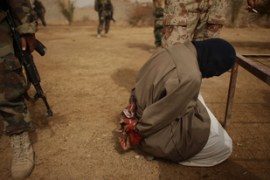 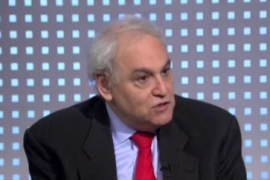 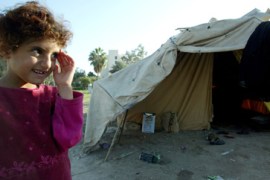 International aid worker visits a refugee camp in the north of the country. 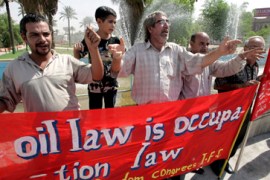 This was no invasion, says a young Iraqi woman – it was mass murder.