The turnout for the elections was only 46 per cent, a record low for any general election in South Korea, despite the election commission offering incentives such as discounted entry to museums, parks and cultural facilities to voters.

The UDP had conceded defeat even before the elections began, saying its goal was simply to secure 100 seats to enable it to block any moves to change the constitution.

It only managed to get 81 seats, down from 136 in the previous assembly.

Kim Il-Young, professor of political science at the Sungkyunkwan University, said that the unappealing election platform of the UDP was to blame for their defeat rather than the turnout.

“Liberals appear to have suffered a humiliating defeat,” he said.

Lee, a former business executive who campaigned on an “Economy, First!” platform, won by a landslide over his liberal opponent in last December’s presidential poll.

His GNP wanted a legislative majority to enact business-friendly measures such as deregulation and tax cuts in an attempt to reinvigorate the economy after a decade of relatively modest growth.

Chung Dong-Young, the UDP’s unsuccessful presidential candidate, suffered another crushing blow on Wednesday when he failed to win a parliamentary seat.

He said his party was “now on the verge of extinction”. 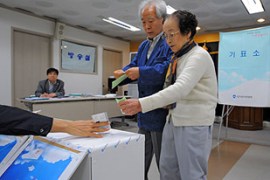 Early forecasts predict a win for the ruling conservative party. 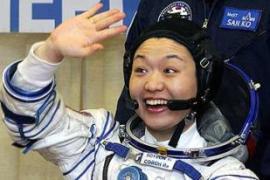 Hopes that Yi So-Yeon’s mission will inspire a space race in her country. 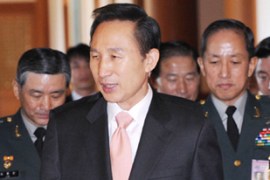