Peter Launsky-Tieffenthal, Austrian foreign ministry spokesman, said on Sunday afternoon that authorities felt that more time was available.
He said efforts to secure the release of the couple were continuing.
Release effort
It is unclear where the hostages are being held, but Austrian officials have been in Bamako, the capital of Mali, for some time.
Some media reports have suggested that Ebner and Kloiber are situated inside Mali, close to its border with Algeria.
Anton Prohaska, a former Austrian ambassador who has led release efforts in Bamako, said on Sunday evening that he and Malian authorities believed they had time to secure the couple’s release.
But Al-Qaeda in Islamic North Africa said in an online statement on March 24 that the new deadline was a final extension.
Previously, the kidnappers warned that any attempt to free the hostages would result in their execution.
The group first said on March 10 in an audio recording that it seized Ebner and Kloiber because of Western co-operation with Israel.
In an interview on Sunday with the daily Kurier newspaper, Ebner’s adult son, Bernhard, said he was not worried that anything major would happen if the latest deadline expired.
Austrian radio, citing no sources, reported early last week that the al-Qaeda affiliate wanted Austrian soldiers stationed in Afghanistan to withdraw.
Austrian troops are serving as part of Nato’s International Security Assistance Force (Isaf) in the country.
The radio report also said the al-Qaeda group was seeking the release of a couple recently convicted in Vienna, the Austrian capital, for involvement in a video which threatened Austria and Germany with attacks.
Source: News Agencies 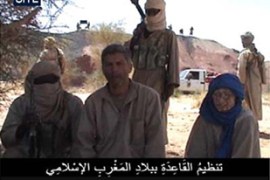 Captors demanding a ransom and the release of prisoners in Tunisia and Algeria.

The two tourists were allegedly seized in Tunisia by al-Qaeda in the Islamic Maghreb.