Two campaigners brandishing a Tibetan flag were arrested for trying to block its path, and two members of media rights group Reporters Without Borders were held for trying to vault over the security cordon protecting the flame.

About 3,000 French police, some on skates and motorbikes, others on patrol boats and even a helicopter, had been assigned the task of protecting the Olympic torch as it was taken through Paris.

About 80 athletes were scheduled to carry the torch over a 28km route starting at the Eiffel Tower before ending at the Charlety track and field stadium.

The disruptions in Paris came as the head of the International Olympic Committee (IOC) raised the issue of Tibet in meetings in the Chinese capital.

“I’m very concerned with the international situation and what’s happening in Tibet,” Jacques Rogge said on Monday in Beijing where he was meeting Olympic officials.

For their part, Chinese authorities condemned the protests that marred a previous leg of the Olympic torch relay in London.

“We strongly condemn this vile behaviour,” China’s state media said on Monday after protests in the British capital that included attempts to extinguish the flame.

Up to 35 people were arrested after thousands of anti-China protesters draped in Tibetan flags disrupted the torch relay on Sunday.

Chinese security officers in blue tracksuits and scores of British police on foot and bicycles encircled the celebrities and athletes carrying the flame, but demonstrators repeatedly broke through their cordon.

One protester tried to grab the torch, while another tried to snuff out the flame with what appeared to be a fire extinguisher.

The group of police guarding the Olympic torch at one point were forced to hustle it on to a double-decker bus when about 100 protesters tried to seize it.

Chinese state television and the English-language China Daily newspaper focused on the larger crowds of well-wishers who lined the route and British sports celebrities holding the torch, showing little or nothing of the protests.

The Olympic torch is expected to remain a magnet for anti-Chinese protests in the run-up to the August Games in Beijing.

Campaigners are seeking to draw international attention to China‘s security crackdown in Tibet as well as its links with Myanmar‘s military rulers and Sudan‘s Darfur region.

Tibet‘s capital, Lhasa, was hit last month by protests against Chinese rule that drew a strong reaction from Beijing and left many dead. 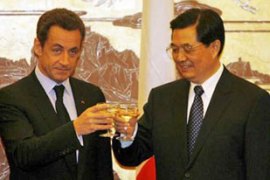 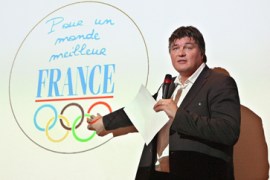 A group of French Olympians plan to wear a badge to support Tibet in Beijing. 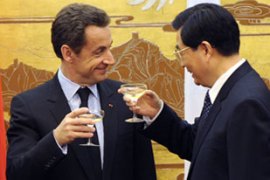 Human rights minister says she did not use the term in a newspaper interview.