He said: “Without geopolitical problems and the fall in the dollar, the prices of oil would not be at this level.”
US factors
Light crude for delivery in June was up 69 cents at $119.21 a barrel by 1148 GMT. Prices are up almost 25 per cent since the start of the year.

London Brent crude was up 71 cents to $117.05 a barrel.
However Al Jazeera’s John Terrett in New York says that several factors in the US may combine to drive down the oil price – including the possibility of a recession which may slow demand as people cut back on transport costs.
The possibility that the US Federal Reserve will cut interest rates, which could stabilise the dollar, would also be good for oil prices as oil is traded in dollars, our correspondent adds.

British Petroleum (BP) shut down on Sunday the Forties Pipeline System that carries more than 700,000 barrels of oil a day to the UK, because of a 48-hour strike by employees at a refinery in central Scotland.

Workers walked out of the Grangemouth refinery vowing not to compromise in their dispute with Ineos, the owner of the refinery, over plans to close a pension scheme to new employees.

Tom Crotty, the Ineos chief executive, said it could take a week for the plant to return to production once the strike ends on Tuesday. 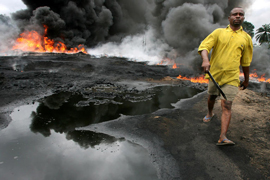 Nigeria produces only 75 per cent of
its capacity due to constant attacks
[File: AP]

BP said its pipeline could be up and running within 24 hours.

BP’s Kinneil plant, the onshore processing centre for the pipeline system, is powered from the Grangemouth site.

David Moore, a commodity strategist with the Commonwealth Bank of Australia in Sydney, said: “With the refinery being shut down, it will affect supplies from the North Sea and that has a potentially significant impact”.

“That comes at the same time that there’s production disruptions from Nigeria so the combined effect of those is the immediate factor that’s put pressure on oil prices”.

In Nigeria, the Movement for the Emancipation of the Niger Delta (Mend), said its fighters hit an oil pipeline on Thursday, the fourth conduit the group has attacked in the past week.

A Shell spokesman confirmed one of its pipelines had been hit, but provided no additional details.

Demand is high for Nigeria’s light, sweet crude, which is easily refined.

However, after years of attacks, Nigeria’s output is dropping and the country can produce only about 75 per cent of its official production capacity of 2.5 million barrels per day.