“But, as apparent today, the government wants us to move, so now we are ready for it.

“It may not be possible for all Afghans to vacate the refugee village in two or three days. It would be a gradual process and we will require an understanding from the authorities and UNHCR.”

Kamal Hyder, Al Jazeera’s correspondent, reporting from Jalozai, said: “This is a place that people have lived in for decades and therefore it is not difficult to imagine that there is a lot of pain that they have to go.”

Abdul Rauf Khan, Pakistan’s chief commissioner for Afghan refugees, said that Jalozai would be closed in an orderly and peaceful way, and that life-sustaining services such as food, water and electricity would not be stopped until the last Afghan leave the village.

Afghans are likely to either go back to Afghanistan with assistance of $100 per person from UNHCR, or to find another refugee camp.

Those who are registered in Pakistan and have a Proof of Registration (PoR) card have the right to stay in Pakistan until 2009, and any attempt to send them back by force would go against international law. 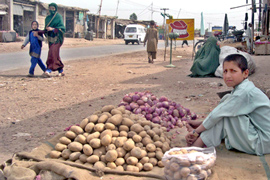 Guenet Guebre-Christos, UNHCR’s representative in Pakistan, said: “We will continue to work with the government to ensure that the closure process is conducted in safety and dignity.”

Haji Baaz Muhammad, an Afghan elder making arrangements for his family’s return to Afghanistan, said: “We hope our last few days in Pakistan will be spent in a respectful manner so that we don’t leave with a bad taste despite Pakistan’s hospitality over the last 30 years.”

Abdul Rehman, a Jalozai resident at the UNHCR’s Hayatabad Voluntary Repatriation Centre in Peshawar, said: “Remember we are refugees, not permanent residents. This has to end one day. Wish us luck so Afghanistan is peaceful and prosperous for all returning Afghans.”

Kilian Kleinschmidt, UNHCR representative in Pakistan, said: “We are now engaging with the new government in Pakistan so that there is a human solution for one of the world’s largest refugee crises.

“Many of the people have found new lives in Pakistan … So the question is, how do we deal with it? … How do we ensure regional stability?”

Jalozai was scheduled for closure in 2006 for security reasons, along with three other camps in Pakistan, following an agreement between the Pakistani government, Afghanistan and UNHCR.

However, the closure rolled over to 2007, when part of the camp was closed in August during the winter, and over 25,000 Afghans repatriated to Afghanistan.

UNHCR and Afghan elders in the camp appealed to the Pakistan government to postpone the closure for six months for humanitarian reasons, taking the deadline for closure to April 15.

Since UNHCR started assisting returns to Afghanistan in 2002, more than 3.2 million Afghans have returned home, including over 24,000 already in 2008.