Second World War ends with Korean peninsula divided between a southern half, occupied by US troops, and a northern half occupied by Soviet troops.

May 10 South Korea holds first elections without the involvement of the North, making Syngman Rhee the country’s first president and effectively sealing the division of the peninsula.

June 25 North Korea, under Soviet-backed leader Kim Il-sung, invades the South, sparking three-year Korean War. About 10 million Koreans are separated from their families on either side of the border.

July 27 Ceasefire signed at border village of Panmunjom. North and South Korea are formally divided at the 38th parallel.

January 21 North Korean commandos attack the presidential palace – the Blue House – in Seoul, in an attempt to kill South Korean leader Park Chung-hee. Dozens are killed and wounded as South Korean forces hunt down the infiltrators. 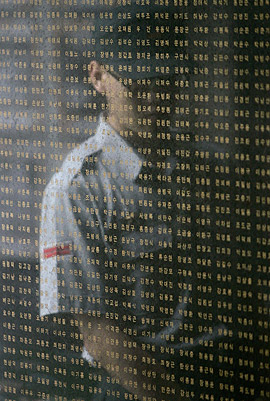 Red Cross societies from both sides meet for the first time in Pyongyang to negotiate the reunion of Korean families separated since the end of the Korean War.

October 26 Park is shot dead by his own intelligence chief Kim Jae-kyu during dinner at the agency’s headquarters following an argument with the president’s bodyguard.

Hints of a slight thaw in inter-Korean relations after North Korea offers food and material aid to a flood-stricken South.

December 13 The two nations sign a non-aggression agreement which includes replacing the Korean War armistice with a peace treaty, the absence of which has kept both sides technically at war.

January 20 North and South Korea sign the Joint Declaration on the Denuclearisation of the Korean Peninsula, stating that the two sides “shall not test, manufacture, produce, receive, possess, store, deploy or use nuclear weapons,” and that they “shall not possess nuclear reprocessing and uranium enrichment facilities.”

January North Korea refuses to allow IAEA special inspections of two unreported facilities suspected of holding nuclear waste, ignoring the terms of the Joint Declaration on the Denuclearisation of the Korean Peninsula.

March 12 North Korea announces it is pulling out of Nuclear Non-Proliferation Treaty.

June Jimmy Carter, the former US president, visits North Korea and helps defuse tensions on the peninsula. Presidents of North and South Korea agree to hold first ever summit on July 25.

November 20 North Korea shuts down North-South Liaison Office in Panmunjom in the wake of heightened tensions. 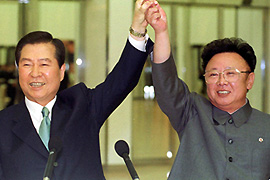 August 15 100 members of separated families head to Pyongyang and Seoul for first-ever family reunion since the Korean War.

September 15 North and South Korean teams march together at the Sydney Olympics under a single flag held by two athletes.

June 29 North and South Korean navies clash over a disputed sea border which Pyongyang declared as invalid in 1999. Five South Koreans are killed and more than a dozen wounded.

October 16 US accuses North Korea or operating a programme to enrich uranium for nuclear weapons, prompting an international stand-off.

January 10 North Korea withdraws from the Non-Proliferation Treaty, which marked the beginning of a series of six-party talks involving China, the Koreas, US, Japan and Russia.

August 27 First round of six-party talks held in Beijing.

February 13 North Korea agrees to close its main nuclear reactor in exchange for fuel aid as part of deal reached during six-nation talks in Beijing.

May 17 First trains in more than 50 years cross the four-kilometre demilitarised zone at the inter-Korean border.

May North Korea test-fires short-range missiles into the Sea of Japan, sparking alarm across the region and worldwide criticism.

September 2 US says North Korea agrees to declare and disable all nuclear facilities by end of 2007.

December 31 A deadline passes for North Korea to present a detailed report of its nuclear programmes. The US says North Korea must provide a full and accurate declaration of all programmes, but Pyongyang later argues it has already provided one.

February 25 Lee Myung-bak takes office as South Korean president. He promises to take a harder line on the North than his more liberal predecessors and says he will not shy away from criticising North Korea‘s human rights abuses. In the following weeks relations take a marked turn for the worse.

February 26 The New York Philharmonic plays an historic concert in Pyongyang seen as a major step in opening cultural ties between North Korea and the US.

March 27 South Korea‘s new chairman of the Joint Chiefs of Staff, General Kim Tae-Young, tells parliament the South will launch a pre-emptive strike against the North’s nuclear sites if it suspects an attack with nuclear weapons is imminent.

March 28 Pyongyang expels South Korean officials working at the joint Kaesong industrial park in the North, one of the few examples of North-South cooperation.

March 31 North Korea threatens to turn the South into “ashes”.

April 1 North Korean media accuses South Korea‘s president, of being a US stooge and causing instability on peninsula.