The crisis was triggered by a Colombian military raid on March 1 against fighters from the Revolutionary Armed Forces of Colombia (Farc), hiding in Ecuador, that left 20 people dead.
The raid was a major blow to the Farc, as the dead included its number two leader, Raul Reyes.
Subsequently, Ecuador and Venezuela sent troops to their borders with Colombia.

Nicaragua and Venezuela also cut ties with Colombia to express solidarity with Ecuador.

Fiery rhetoric
After a session at the Rio Group summit marked by exchange of insults, Hugo Chavez, the Venezuelan president, intervened to defuse tensions, saying: “We cannot continue to blow the winds of war.”
The summit ended with handshakes between Alvaro Uribe, the Colombian president, and both Correa and Chavez.
Uribe apologised for the raid but did not say that he would not carry out another raid.
Afterwards, Nicaragua and Venezuela announced they would re-establish ties with Colombia.

A motion was later passed by the summit requiring all three countries to fight threats to national stability from “irregular or criminal groups”, referring to the Farc.

Uribe’s charges
Earlier, Uribe had reiterated accusations that his neighbours have been supporting fighters seeking to overthrow his government.
He said that evidence had surfaced showing that Farc had sent aid to Correa.
Chavez, for his part, faced the accusation that he had given some $300 million to the fighters. He said he had never sent Farc either money or weapons.

Correa described Ecuador as a victim of Colombia’s conflict, and proposed an international peacekeeping force to guard their border.

But his idea was not included in the summit declaration.

Rios was reportedly shot dead by his own chief of security, who offered his severed hand as proof to the Colombian authorities, Santos said.

“Farc has suffered a new, major blow,” he said.
Rios was believed to be the youngest member of Farc’s secretariat and considered one of the closest aides to Manuel Marulanda, the group’s founder.
Source: News Agencies 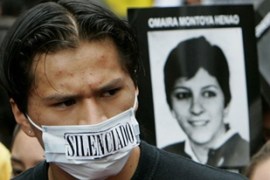 Protests held in Colombian capital and across the world against paramilitary killings. 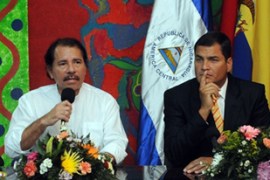 President meets his Venezuelan counterpart as the row over Colombian raid simmers. 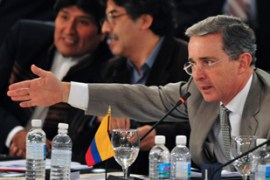