For the first time, many Malaysians of Indian origin – particularly those in lower income groups – are actively campaigning for the opposition, a departure from the traditional support usually given to the ruling coalition.

The swing has been triggered by the government’s move to crush demonstrations in Kuala Lumpur in November last year to protest against alleged racial discrimination.

Riot police fired tear gas and chemical-laced water cannon to disperse tens of thousands of protestors, mobilised by the Hindu Rights Action Force (Hindraf), in what was one of the biggest mass protest seen in the country in decades.

Since then, many Indians have embraced “makkal sakti”, Tamil for “people power”, as the battle cry for political change in the elections, joining the opposition campaign to reject five decades of BN rule.

Internet-savvy Indians, particularly younger activists, have embarked on an extensive campaign of mobile text messaging, emails and blogs to express their frustration with the government and to urge a vote swing.

They want an end to what they say has been a spate of demolitions of Hindu temples and discriminatory policies in education, business and housing.

Slightly more than half of Malaysia‘s population is ethnic Malay, followed by about 36 per cent Chinese and 8 per cent Indian.

Malaysia‘s political system is run along ethnic lines, with BN made up of 14 race-based parties and the core parties of the coalition – the United Malays National Organisation (Umno), the Malaysian Chinese Association (MCA) and the Malaysian Indian Congress (MIC) – representing the three major ethnic groups respectively.

Ethnic Indians say the unequal distribution of wealth has denied them their rightful share of the economic pie, charges the government has repeatedly denied.

Since the Hindraf rally, many Indians have been campaigning to not only bring down the BN, but also to deny Samy Vellu, the head of the MIC and the de facto political leader of the community, a ninth term in office. 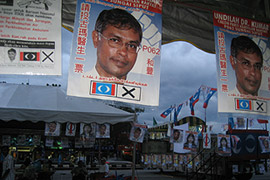 The disfranchisement felt by many Malaysian Indians marks a significant shift in the country’s political scene.

M Ganesan, 31, who works in a private company in the northern state of Perak, said the fact that many ethnic Indians had travelled from across Malaysia to attend the Hindraf rally in Kuala Lumpur pointed to the widespread anger among the community.

“I don’t understand why the government is blaming us for demanding our rights,” he told Al Jazeera in Sungai Siput, the constituency Samy Vellu has held since 1974.

“We must deny the BN a majority. If they have overwhelming support, we will be in trouble because they will come after us.”

Ganesan said most Indians were still angry that the government felt justified in using force against protesters during the November rally.

“We know that the statements assuring Indians that temples will not be demolished is a mere eye-wash,” he said.

“If the government takes care of its people, they will surely support it,” he added. “If not, they will definitely oppose it.”

Samy Vellu’s challenger, Jeyakumar Devaraj, a candidate for the opposition Keadilan party, is trying for the third time to unseat the incumbent.

“No doubt the Indians are very upset and I’m confident of a vote swing for the opposition,” Jeyakumar told Al Jazeera at his operations centre.

“But this is also the best opportunity for all Malaysians to show their unhappiness with government leaders in other constituencies.”

G Kavitha, 32, a mother of three, conceded that the votes of Malaysia’s relatively small and widely scattered Indian community would not be enough to change the government.

“What is more important is for Indian voters and the opposition as a whole to put a dent in the BN armour,” she told Al Jazeera in Sungai Siput.

The “makkal sakti” grassroots movement may have caught on with the masses of lower-income Indians, but many middle-class ethnic Indians are still to be convinced that the ruling coalition has failed to deliver on its promises.

S Muthu, a self-employed youth in the capital, says the BN has done “many good things for the people”.

“We must continue to support the government so that our country can see more development and become the best in the world,” he told Al Jazeera at an opposition campaign rally in Klang, about 30km south of the capital.

It is a message not lost on the government, with Malaysia’s overwhelmingly pro-BN press running numerous articles by prominent Indians including wives of former politicians and young businessmen praising the government for progress and stability.

The central theme of all the articles is a call for Indians to “vote wisely” for continued peace and to remember the benefits gained since independence in 1957.

“This is not mere lip service,” he was quoted as saying while campaigning in his Penang constituency. “It is a serious promise and we will do it.”

Speaking to a gathering of local Indians he assured them that he would deliver “all that you ask for” if they return BN to power.