An unidentified military commentator was quoted as saying in the North’s official Korean Central News Agency: “Our military will not sit idle until warmongers launch a pre-emptive strike.

“Everything will be in ashes, not just a sea of fire, once our advanced pre-emptive strike begins.”

The warning comes as a South Korean newspaper said on Monday that North Korean fighter jets had been testing South Korean nerves by flying close to southern air space.

The report in the Chosun Ilbo newspaper said South Korean fighters had been scrambled at least 10 times in the past month in response to near incursions.

Last week, Kim Tae-young, the chairman of South Korea’s joint chiefs of staff, told a parliamentary hearing that the military would strike a suspected North Korean nuclear weapons site if it believed the North was about to launch a nuclear attack.

In reports on state television on Monday North Korea‘s military said Kim’s remarks would be seen as “tantamount to a declaration of war” if Seoul did not apologise.

Lee’s predecessors had sent billions of dollars in aid to the North, getting little in return, according to critics.

But the new president has said that if Pyongyang wants to keep receiving aid, it should improve its human rights record, abide by an international nuclear disarmament deal and start returning the more than 1,000 South Koreans captured or held since the 1950-53 Korean war.

The war ended in a truce rather than a peace treaty, leaving the two sides still technically at war.

Its latest comments come just before parliamentary elections next week in South Korea that could strengthen Lee’s hand if conservative allies win control of the legislature.

The North has made similar statements in the past, usually in response to joint South Korean-US military drills. In 1994, a North Korean official threatened to turn Seoul into a “sea of fire”.

Its comments also came ahead of a visit to South Korea by the chief US negotiator in stalled North Korean nuclear disarmament talks.

Christopher Hill was due to arrive in Seoul on Tuesday to speak at a forum and talk with South Korean officials.

On Thursday North Korea expelled South Koreans working at a joint factory park in the North after South Korea said it would hold off expanding the joint industrial zone until the dispute over Pyongyang‘s nuclear programmes was resolved.

The Kaeson industrial park, located on North Korean territory, had been hailed as a model of economic co-operation,

South Korea‘s defence ministry has said it will consider whether to send a response to the North over its demand for a retraction of Kim’s pre-emptive strike statement.

A senior officer at the defence ministry said officials were working “to ensure the public would not worry about” the North’s recent actions and statements, but did not elaborate. 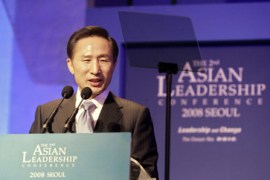 “The Bulldozer” promises sweeping changes including a tougher line on North Korea.