Tata Motors, India’s top bus and truck maker, has been in talks with Ford since it was chosen as the frontrunner to buy Jaguar and Land Rover early in 2008.
Union support
Tata currently controls more than half of India’s truck market and nearly 20 per cent of its passenger car market, and is keen to expand beyond Asia.
Earlier, the sale was confirmed by Tony Woodley, joint leader of Britain’s biggest union Unite, which supported Tata’s bid.
“We would have much preferred Ford to keep the companies in the family, so to speak, especially with Land Rover being so profitable,” Woodley said in a brief statement received in London.
“But with the commitments Tata have given to the future of Jaguar-Land Rover and the long-term supply agreements for components, especially engines from Bridgend and Dagenham [Ford sites in Britain], we’re obviously pleased.”
Tata has promised to keep the Jaguar and Land Rover “identities intact” and unions have been told there will not be any redundancies.
Falling sales
US and European sales of Jaguar fell by more than 30 per cent, year-on-year, during the first two months of 2008.
Aniket Mhatre, an auto analyst at Mumbai brokerage Prabhudas Lilladher, said: “Both brands are already experiencing declining sales.
“The US is going through a slowdown so sales [of luxury vehicles] are not going to be that good.”
The US car-maker Ford, which owns the two British brands, has lost $15bn over the past two years and announced its intention to sell last year as part of restructuring.
Analysts have expressed concern that Tata, which has been on a buying spree – snapping up Corus, the Anglo-Dutch steel maker, the Ritz-Carlton hotel in Boston and tea-maker Tetley – is taking on too much debt.
Ratings agency Fitch estimates Tata’s debt has grown by more than $21bn since 2001.
Shares in Tata Motors closed down 0.1 per cent at 679.40 rupees ($16.9) on Mumbai’s stock market, which itself fell 0.8 per cent.
Source: News Agencies 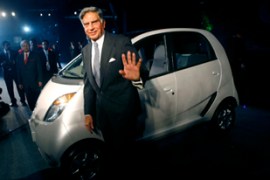 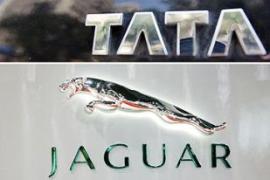 Indian firm in “detailed talks” with Ford for purchase of Jaguar and Land Rover.