“At one point the luggage was returned to the terminal because the system said our flight had already departed,” he said.

Other problems at the new $8.65bn terminal included car parking, staff security screening and general unfamiliarity over the layout.

BA said it had suffered “a few minor problems” during the first day of operation.

In a statement it said: “This is not unexpected following one of the most complex and largest airport moves in history.

“These teething problems have included car parking provision, delays in staff security screening and staff familiarisation with the terminal. We have also had some baggage performance issues.

“These issues are being resolved and we are sorry for any inconvenience this has caused.”

About 97 per cent of its flights did go ahead as normal, BA’s statement said.

Tight security was in place in expectation of demonstrations by “green” protesters who are against the expansion of the world’s busiest international airport.

Around 200 of them appeared in the main entrance, wearing “Stop Airport Expansion” red-and-white T-shirts in a peaceful protest.

Authorities had been on heightened alert after a series of embarrassing security breaches at Heathrow.

On the eve of Queen Elizabeth II formally opening the terminal earlier this month, a man ran onto a runway, while in February protesters broke into the airport and wrapped a banner around an aircraft.

The open-plan terminal is Britain’s largest enclosed space, the equivalent size of about 50 football pitches, and plays host to luxury goods shops and restaurants.

BAA, Britain’s airport authority, says passengers want luxury shops but critics say the company should do more to speed passengers quickly onto flights rather than trying to make money from them as they wait.

The first passengers to arrive at the new terminal were from Hong Kong at 0450 GMT, while the first outbound jet left the airport at 0620 GMT bound for Paris. 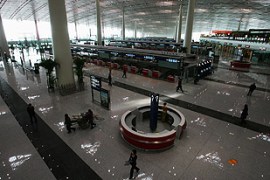