Bilawal Bhutto Zardari, the 19-year-old son of Benazir Bhutto, who succeeded her as chairman of the PPP, will announce the candidate.
Haider Abbas Rizvi, a member of parliament for recently defeated MQM, said the decision to withdraw the candidacy was made late on Friday.
“We will support the PPP candidate unconditionally,” he said.
“Political harmony”
Rashid Qureshi, a presidential spokesman, said: “The new parliament is to meet on Monday to elect the prime minister, who is to be sworn in by President Pervez Musharraf on Tuesday.”

Farooq Sattar had been nominated last week as the joint candidate of Musharraf’s loyalists in the parliament.

The decision to withdraw was taken after Zardari held talks with Altaf Hussain, the MQM leader who lives in exile in London, Sattar said.
“It is not for greed or lust for power. It is in the larger interest of the country, for the stability of the country and for political harmony.”
The move is the biggest indication so far from Musharraf’s allies that they are willing to co-operate with a new Pakistani government dominated by their opponents.
The new administration will be led by followers of Bhutto and Nawaz Sharif, also a former prime minister, who was ousted in Musharraf’s 1999 coup.
A confrontation still looms between Sharif and the increasingly unpopular former general, who wants to stay on as president.
Tribal areas
Zardari told Geo TV late on Friday: “We will maintain and reciprocate this spirit.”
He said he would strive to make Pakistan’s next government “a government of national consensus”.
Babar, the PPP’s spokesman, hailed the MQM support as “a positive development”.
The coalition has also indicated that it will take a softer approach towards armed groups fighting within the tribal regions that border Afghanistan.
A new video by Jalal al-Din Haqqani, a senior Taliban commander from Afghanistan, has prompted fears of further unrest in Norht and South Waziristan.
Zardari ineligible
In February’s general elections, the PPP emerged as the largest party, but has struggled to settle on a candidate amid a power vacuum left by Bhutto’s assassination in December.
Zardari has held a series of meetings with legislators and coalition partners on the choice of prime minister but no clear frontrunner has emerged.
Bhutto was the first choice for the party, but her assassination in a gun and suicide attack at an election rally on December 27 left the PPP in limbo.
The main contenders were Yousuf Raza Gilani, former parliament speaker, Ahmed Mukhtar, a former trade minister, and Makhdoom Amin Fahim, the party president, as well as Shah Mahmood Qureshi, Punjab province party chief.
Zardari himself is ineligible because he is not an MP, but insiders say he may run in a by-election in May to join parliament and possibly seek the premiership.
Source: Al Jazeera, News Agencies

Soldiers killed in attack near Afghan border as US vice-president visits Kabul. 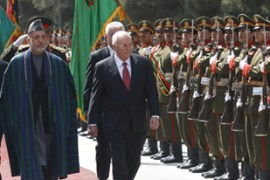 Fahmida Mirza will play a key role if parliament decides to confront the president. 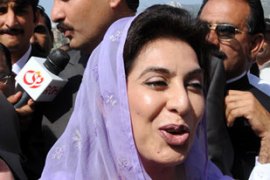 Many die in Pakistan missile strike 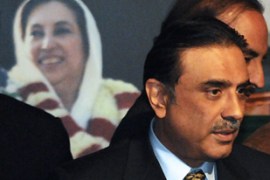