One of them will succeed the DPP’s Chen Shui-bian whose popularity has slumped after eight years in power, amid allegations of high-level corruption and Taiwan‘s lacklustre economic performance.

Opposition to Chen was the driving force behind a KMT sweep of legislative elections held in January.

As a result Ma, who advocates closer ties with China as a way of reigniting Taiwan‘s economy, is widely considered the favourite to win backing from the island’s 17 million voters.

Al Jazeera correspondent Hamish MacDonald, reporting from in Taipei, says Ma’s pro-China platform has generated strong appeal in the business community, buoyed by the promise of greater access to the Chinese market.

The KMT candidate has also said he wants to negotiate a peace treaty with Beijing, but has promised not to discuss political union – as China wants – during his presidency.

For weeks Ma has commanded a double digit lead in opinion polls.

But our correspondent says recent days have seen the DPP’s Hsieh narrowing the gap, winning over swing voters with a message that a vote for Ma would make Taiwan “a second Tibet“.

On Friday newspaper adverts posted by the Hsieh campaign urged voters to “protect Taiwan” saying the island’s election posed “a choice between a democratic Taiwan and Communist China”.

Taiwan split from mainland China in 1949 following the communist victory in the civil war, and Beijing regards the self-ruled island as a “renegade province”, threatening to use force to prevent Taiwan declaring formal independence.

Ma himself has fought back against Hsieh’s challenge, rejecting claims that he is soft on China and taking a tough line against the crackdown in Tibet.

Earlier this week Ma was first to suggest a boycott of the Beijing Olympics if violence in Tibet continued, but he has disputed his rival’s suggestions that China‘s actions in Tibet could be repeated against Taiwan.

Aside from selecting a new president in Saturday’s election, voters will also be offered a referendum on whether to seek UN membership.

The initiative, which asks whether Taiwan should seek to join the global body as “Taiwan” instead of its legal name, the Republic of China, has sparked statements of protest from China which sees the move as a further move towards independence.

Japan, Russia, France and the US have also criticised the referendum as unnecessarily provocative.

In a sign how sensitive the poll is, two US aircraft carriers have been deployed to an unspecified area near Taiwan during the election for what US defence officials say are training exercises.

In 1996, during Taiwan‘s first democratic presidential election, China fired a series of missiles into the Taiwan Strait in a sabre-rattling gesture seen as trying to intimidate voters. 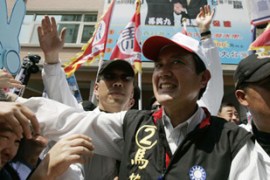 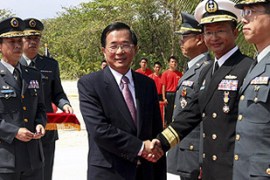 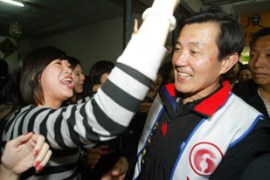