The meeting follows a bomb attack last Saturday at a hotel in Pattani province popular with local and foreign NGOs and journalists that left two people dead and confidence in any “safe zone” in the area shattered.
Symbolic attack

Al Jazeera correspondent Selina Downes says the CS Pattani hotel was considered a haven from the fighting and a venue for reconciliation where government officials and Muslim leaders held meetings to try to end the conflict.

Human rights groups say the bombing was as symbolic as it was destructive. 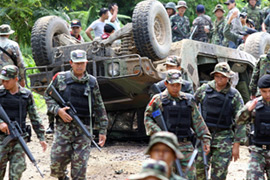 The new Thai government says it wants to talk,
not use force, to end the violence[AFP]

“It is a political statement of separatist groups showing that they can still launch large scale attacks,” Sunai Phasuk of Human Rights Watch said of the attack.

“They are stressing the message that the land of the south does not belong to Buddhist Thai or ethnic Chinese.”

The hotel bombing left Chalerm Yubamrung, Thailand’s interior minister, admitting he did not have “any idea how to solve” the situation.

“The southern unrest is a very serious problem,” he told reporters. “It’s based in their religion, their beliefs, and their complaints regarding discrimination.”

Chalerm held talks with security officials in Songkhla in the south on Thursday but stayed out of the most volatile provinces of Narathiwat, Pattani and Yala, drawing criticism that he was afraid of travelling in the region.

Rejecting the criticism, the minister said he did not want to disrupt security work in the region and would visit the provinces later.

He said the new Thai government, installed in January, was committed to peaceful means to end the crisis.

“I want to stress that our policy – the prime minister and myself – we want to talk, we don’t want to use force,” he said.

He has also called for help from the opposition Democratic party, whose political strength is in the troubled region, and said that negotiations with the separatists may require the help of foreign mediators.

But the government’s emergency meeting comes on a day when the Thai government is also reviving its controversial “war on drugs”.

The first time the policy was launched by Thaksin Shinawatra, the former prime minister, thousands of people were killed and critics accused government forces of extra-judicial killings.

Thaksin’s crackdown in the south was also blamed for inflaming the situation and alienating many Muslims.

The military leaders who ousted Thaksin in a September 2006 coup fared no better, initiating various reconciliation and peace-building measures but failing to stop the violence.

The new government has said it wants to rebuild relations with the Muslim community.

“We will kick-start a new economic era in the south. We want to hear how we can help them. We want them to have a sustainable community,” Chalerm said.

But talk of autonomy for the southern region was quickly quashed by Samak Sundaravej, the new prime minister, shortly after he took office and analysts say the government cannot negotiate if it does not know who to negotiate with. 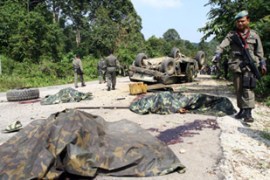