George Bush, the US president, and the neo-conservatives claimed that Iraq under Saddam Hussein, the executed former president, possessed weapons of mass destruction.

But the real reason for the US invasion and occupation of Iraq, as cited by Alan Greenspan, former Federal Reserve chairman, was to secure and control Iraq‘s oil.

The actions of the US government under the Bush administration have resulted in genocide; their greed to steal Iraq‘s oil has led to the country’s destruction.

Saddam Hussein was a dictator, and Iraqis did want true democracy, a good life and a change that would elevate and advance their country, which once had great wealth and thousands of highly-qualified professionals.

But the line that US soldiers are in Iraq to save the Iraqis from dictatorship, liberate the country and propel it forward is a big lie. They are there to protect US greed for oil and for establishing strategic military bases.

They are not there for the Iraqi people.

US actions and imposed sectarian policies have created the “killing fields of Iraq“. More than 1.2 million non-combatant civilians have been killed, according to British polling agency ORB.

In what the UN has called the biggest civilian displacement catastrophe in both the 20th and 21st centuries, 2.5 million Iraqi civilians, including the majority of the educated middle class, have sought refuge in Syria and Jordan, while two million have become refugees inside Iraq.

Prompted by a political process that was introduced and enforced by the Bush administration, Iraq has become a war-torn nation with a society that has been ripped apart by sectarian fighting.

From 1980 to 2000, 15 to 25 per cent of parliament members were elected women. Nearly 50 per cent of Iraqi government staff was comprised of women.

Some two-thirds of the staff of the ministry of foreign affairs was comprised of women.

But women’s rights, which were the most protected among developing countries, have severely deteriorated to such an extent that most can no longer leave their houses.

They are forced to wear a veil – even Christian women – and have stopped working in government offices or attending schools and colleges.

This goes to the heart of the lack of security today. Iraq previously had law and order. Foreign personnel in the UN, members of NGOs and embassies did not have security problems, whether in Baghdad or the 18 governorates.

After the US occupation, there is no security whatsoever. People do not dare leave their homes even to buy necessities. In 2006, the UN estimated that 120 civilians were killed every day.

The Iraqi education system, which comprised advanced university and college levels, was among the best in developing countries. Now, it is one of the worst.

Most teachers have fled the country; those who remain are constantly under the threat of student abuse, according to the UN. Many students do not attend for fear of kidnapping and they shun religious rituals which are now carried out on campus grounds during study hours.

Iraq was considered one of the world’s least corrupt developing countries. Kickbacks from the UN’s Oil for Food programme were diverted to the Iraqi government and used to pay the salaries of civil servants throughout the country.

But the country is now one of the most corrupt in the world, according to Corruption Watchdog Transparency International. Of the 163 worst countries listed in the 2006 Corruption Perception Index (CPI), Iraq is number 160.

The US embassy in Baghdad‘s report on corruption, issued last September, concluded that “currently, Iraq is not capable of even rudimentary enforcement of anticorruption laws”. 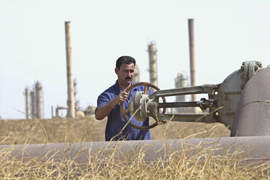 Did the US invade Iraq to secure the country’s
vast oil resources? [EPA]

Compared to other developing countries, Iraq had one of the best and finest professional civil service staffs.

These professionals were able to keep the country from collapsing during the 13 years of harsh economic sanctions imposed on Iraq.

Most of these qualified people have now fled to neighbouring countries. Hundreds others have been assassinated.

Their positions have been filled with former exiles, members of the Iraqi Governing Council and party member’s relatives, many of whom have no civil service experience.

According to the inspector general of the Ministry of Health in 2005, 65 per cent of appointees held counterfeit college degrees and had not even finished primary schools.

The medical services sector is perhaps one of the most harmed by the invasion and occupation.

Before the war, hospitals and doctors, though impeded by the imposed sanctions since 1991, provided a better health system than those of other developing countries.

Now, the medical system is completely shattered. According to the Ministry of Health’s 2007 official report, more than 18,000 doctors have fled the country since 2003.

When electricity, water and sanitation infrastructure were destroyed in the 1991 Gulf War, they were completely restored in less than one year.

Today, after five years of war, the public services are nearly non–existent, although more than $140bn have entered the Iraqi government’s coffers since 2003.

Most of the destruction was caused immediately after the fall of Baghdad in April 2003, when the US army allowed rioters to loot and burn government buildings.

Five years ago, Iraq was free from drugs. Iraq today is rampant with drugs and drug addicts.

Faruq Ziada is a former Iraqi ambassador. He has served on many UN committees over the past two decades and participated in several Arab ministerial and international gatherings.