“Our country, Belgium, remains a country where it is good to live and which has plenty of things of which we can be proud,” Leterme said, ahead of a vote of confidence in the Belgian parliament on Saturday.
The parties had disagreed on how much power should be devolved to the regions, with parties in the more populous and prosperous Dutch-speaking region of Flanders demanding more control over their affairs.

Leterme said that the five-party deal, reached on Tuesday, was indeed a “good coalition agreement”.

He said he was confident that a majority of both Flemish and Walloon lawmakers, would back the coalition.

The coalition government has made it clear that important issues such as immigration would be dealt with as a priority, with an emphasis on making entry easier for migrants who can benefit the economy, while stopping those who cannot.

However, devolution will be the key issue facing the new government and they have pledged to resolve it by July.

Flemish speakers make up about 60 per cent of the 10.5 million population of Belgium but the French-speaking population, living mainly in Wallonia and Brussels, fears that devolution could lead to a division of the country.

Leterme’s coalition government is yet to describe in detail as to how it would address the issue of a relationship between the federal state and the different linguistic communities.

Observers have said that the current team lacks cohesion and questions have been raised about whether the new cabinet, which is  essentially the same, will last a year.

According to a survey made public Wednesday for RTL-TVI/VTM  television, 63 per cent of Belgians do “not have confidence” in the new government. More than half of those questioned believed it would collapse by the summer. 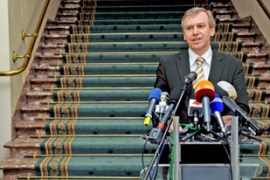 New national government to be formed after nine-month impasse.