On a recent flight from Cairo to Damascus, two men were discussing pending entry restrictions for Iraqis who have left their country and are attempting to find residence throughout the Middle East.

The younger of the two, speaking with a Baghdad accent, says Syrian authorities have introduced a time limit on how long Iraqis can stay in that country.

Initially, at the end of a 15-day grace period, Iraqis in Syria were to leave the country and could not return for 30 days (The Syrian government later reneged on the decision on humanitarian grounds).

“Are they then going to Amman?” asked the elderly Iraqi gentleman, with an inflection native to the southern provinces.

In thousands of cafés, restaurants, bus and train stations, airports, hotels and local immigration centres, millions of Iraqis who have fled the violence in their own country are contemplating where they will be next week.

According to estimates released by United Nations and relief and refugee agencies, some two million Iraqis have left Iraq since the March 2003 US-led invasion and by the end of 2007, some 10 per cent of the Iraqi civilian population will have left for neighbouring countries.

But these are only estimates and the UN admits that figures are hard to come by because not all Iraqis register with refugee offices once they reach their destination ports.

“What? No, the figure is much higher,” said the Baghdad airline passenger who was going to Syria to visit his father and brother who recently arrived there from Iraq.

He said he has visited suburbs and new residential projects in and around Cairo, such as Giza’s Faisal as well as 6 October and Rehab cities where thousands of Iraqi families have bought or rented property.

Giving his name only as Ahmed, he said he is one of the lucky ones – he managed to find work as a building contractor in Nasr City, an outgrowth of central Cairo.

In Maadi, an affluent suburb of Cairo that was once a British military installation during World War II, two Iraqi families arrive at the Aseel Building which overlooks the Nile and is situated along the Corniche.

Majid, one of the men looking to buy an apartment for his family, said he used to run a plastics factory in Baghdad but, after several of his employees were killed, decided it was time to leave.

He smuggled much of his money out through relatives and decided Cairo would be a more lucrative destination for businessmen such as himself.

“I am ready to pay $200,000 for a good apartment with a good view,” he said to the real estate agent accompanying him.

By the end of the day, the two families had both bought apartments in the same building.

“It is an invasion of Iraqis,” exclaimed one resident.

But not all Iraqis are wealthy enough to seamlessly relocate from one Arab city to another.

In Damascus, the ancient city’s streets are festooned with a dizzying throng of Iraqis, many of them unemployed and in their mid-twenties. In some sections of the city, a casual bystander would be hard-pressed to discern the famous Syrian dialect – Iraqi Arabic has become as native as Shami.

While Syrian authorities have been more accommodating of Iraqi refugees than other Arab neighbours, the constant stream of those escaping violence has put a strain on Damascus. Rent in many Syrian cities has rocketed by about 300 per cent.

The real estate business has seen significant growth as nearly every neighbourhood now boasts at least two or three such enterprises offering rent and purchase deals for Iraqis.

Over-booked hotels have increased their rates and there is concern that educated, middle-class Iraqis with PhDs and technical expertise could overburden the Syrian workforce.

But where are Iraqis to go?

When Amman started to turn back thousands of Iraqis at the border crossings, many turned to Damascus and Cairo.

Mohammed, a musician, was contracted to perform at a New Year’s party in Amman but was turned back in the airport. He said he had been to Amman nearly a dozen times in the past five years. He returned to Baghdad and found a venue in Aleppo instead.

But the influx – some 40,000 Iraqis stream into Syria every month – has alarmed the Damascus government which is struggling to find means to accommodate them while protecting its security and economy.

Recent entry curbs by the Syrian government to regulate the influx were quickly criticised and received with despair by Iraqis.

Two weeks ago, Iraqi refugees staged a demonstration outside the offices of the UN High Commissioner for Refugees (UNHCR) in Damascus protesting against rumoured curbs on entry permits into Syria.

The Syrian government relaxed its initial curbs after receiving the UNHCR’s António Guterres.

He listened to their plight and reasons why they could not return to their homes in Iraq under the present security situation.

Guterres’ visit may have got the Iraqis what they ultimately wanted: attention.

A week after his visit the US sate department announced it would allow 7000 Iraqis to seek asylum in America.

Since 2003, Washington has granted refugee status to just 435 Iraqis.

In September, Al Jazeera.net met with several families in Jordan who had applied for refugee status in the US. Of 200 families, 14 had been granted asylum in the US. By early February, 12 of those had left for the US while the others were still waiting for their entry permits.

“We’re encouraged by the recent US decision,” said Ruma, one of the Iraqis waiting for her final papers and visas to leave for the US.

On February 16, the US state department also announced it had called in Syria‘s ambassador to discuss the Iraqi refugee crisis.

Japan also followed suit and pledged $3m for Syria and $1m for Jordan to assist in the growing Iraqi refugee crisis.

But assistance may be slow in coming.

Last month, Iraqi and US military forces closed all border crossings to and from the country’s neighbours for three days amid a new security clampdown in Baghdad.

At a station frequented by buses leaving and arriving from northern Iraq in the Bab-al-Farraj district of Aleppo, dozens of Iraqis gathered to await news of relatives stranded at the border.

Arriving asylum seeker Sarmad, 29, a teacher in Hammam Al Ali, south of Mosul, said he was a teacher in a middle school but was forced to leave after receiving death threats.

“Teachers make a lucrative target for the terrorists,” he said

Sarmad’s problems began when he helped an 11-year-old student escape in the trunk of a car after his businessman father was threatened by an unknown group.

Children of more affluent Iraqis are particularly susceptible targets in the new Iraq as their ransom can fetch up to $1m.

Sometimes, the children are not returned and their corpses are discovered in rubbish dumps and ditches.

“The boy was terrified as the headmaster and I forced him into the trunk – we had to smuggle him away because he would have likely been kidnapped and killed,” Sarmad said.

When word got out that he had helped his student escape, he was put on a hit list by Abu Omar, a north Iraq cleric who issues death warrants on people he deems “outside the Islamic fold”.

After sending his wife to live with her family – members of the Jabour tribe – in oil-rich Qayara in Ninevah governorate, Sarmad fled for Syria.

He is applying for refugee status in Sweden.

The Scandinavian nation, already home to a large Iraqi refugee community since the mid-1990s, is just one of many desired destinations for those escaping the violence.

“Once I get there, I will send for my wife and if Iraq is ever the same again, we might think of returning one day,” he said.

At the Infinity internet café in the Meridian section of Aleppo, I found Sarmad using a popular online chat server to speak with his wife in Iraq.

“They kidnapped my nephew … maybe to get to me … I must return,” he said before rushing out.

Two days after returning to Mosul, Sarmad called me. His voice was devoid of tone, subdued by defeat.

After a few moments of silence, he said that the day after his return to the northern city he was sent a package containing his nephew’s decapitated head. 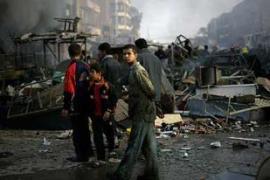 A tenth of Iraq’s approximately 27 million people are religious or ethnic minorities. 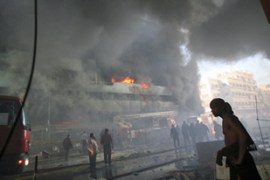 US to take in more Iraqi refugees