“Chicken, what chicken? I can’t even afford a drumstick. What are people going to do, eat pebbles,” one woman said to Al Jazeera.

One kilogramme of chicken now costs $4, the price has doubled in just two months.

The UN World Food Programme says that average household expendidture has risen by 50 per cent in just three months.

Four people have been killed in fights that broke out in bread queues in recent weeks, a security official told the AFP news agency.

Egypt is suffering from severe bread shortages brought on by the rising cost of wheat on world markets and sky-rocketing inflation.

The official annual inflation rate reached 12.5 per cent in February.

The officially sanctioned Egyptian Workers’ Union has said that it will try to get the minimum wage raised from 200 Egyptian pounds to 800 pounds, around $150.

Mahmud al-Asqalani, spokesman for the recently created Citizens Against Price Rises, said: “If the government doesn’t realise the seriousness of the situation we will be heading for an explosion that will be bigger than that in 1977.”

At least 70 people were killed when bread riots erupted in January 1977 after the government tried to reduce subsidies.

Gouda Abdulkhaliq, an economics professor from Cairo, said the situations now could be much worse, because the government says the economy is stable, growth is steady and there is foreign investment coming in.

“None of this is filtering down to the level of the normal Egyptian and the result is that they are feeling frustrated and angry,” he told Al Jazeera.
Source: Al Jazeera, News Agencies 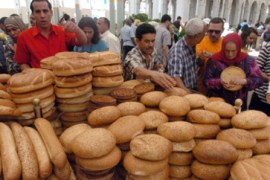 Imran Garda looks at the increase in the costs of food in the Middle East. 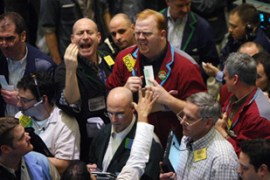