Iranians killed
Salim Kadhim, a spokesman of the Karbala health directorate, said on Tuesday that the dead included seven Iranian pilgrims.
Another eight Iranians were wounded.
The Karbala blast was the deadliest in a series of attacks that left scores of Iraqis dead, including six youths killed when mortar rounds hit a soccer field in eastern Baghdad.
Two US soldiers also were killed on Monday in a roadside bombing north of Baghdad, bringing the American death toll closer to 4,000.
The US embassy and military subsequently issued a joint statement blaming al-Qaeda in Iraq for the Karbala attack.
The bomber struck after the worshippers had gathered at a sacred historical site about half a mile from the golden domed shrine of Imam Hussein, a grandson of the Prophet Muhammad who was killed in a seventh-century battle.
Police later closed the area around the twin golden dome mosques and blocked all roads leading to the sites.
Karim Khazim, the city’s chief health official, said seven of those killed were Iranian pilgrims who had travelled to the holy site.
Source: News Agencies 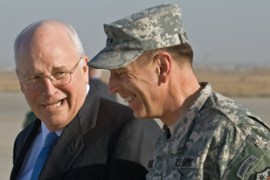 US vice-president arrives in Baghdad at the start of nine-day visit to Middle East.