He said he hoped the new line up “can serve the people more effectively and bring a fresh approach to the country’s administration”.

“My expectation is that they will perform better than before,” he said after announcing his new administrative team on Tuesday.

Abdullah downsized the cabinet, which had been criticised as unwieldy and wasteful, from 90 to 69 positions after dropping the roll call of parliamentary secretaries.

“This means that the ministers and the deputy ministers will have to be more active in parliament,” he said.

Rafidah Aziz, the trade minister who had held the post since 1987, became the biggest casualty in the major reshuffle.

Abdullah refused to explain why Rafidah was dropped except to say that “she should make way for someone new”.

She has been replaced by Muhyiddin Mohd Yassin, the outgoing agriculture minister.

Abdullah said he will also instruct all ministers to declare their assets, according to Bernama national news agency.

“I want their assets to be known to the public, that is important,” he said.

He said the new cabinet would be told about it at its first meeting on Wednesday.

On March 8 the ruling Barisan Nasional (BN) coalition lost its two-thirds parliamentary majority for the first time in almost 50 years, as well as key leaders of major component parties.

Abdullah relinquished his portfolio of internal security but held on to the post of finance minister.

His place will be taken by Rais Yatim, who was the arts, culture and heritage minister.

Abdullah also defended Najib Abdul Razak, his deputy and heir-apparent, against allegations of wrongdoing in military contracts, saying they had the “best of relationships”.

“There is no proof that Najib is involved in any corrupt activities,” he said.

“People can make all kinds of allegations, but what is important is that there is no evidence of that.”

Zaid Ibrahim, a leading critic on social and human rights issues who was refused permission to contest in the polls, will be the de facto law minister.

Once he is appointed to the upper house of Parliament, Zaid will start with the task of reforming the judiciary.

Shahrir Abdul Samad, who was dropped as the backbenchers club president after voting against the government in parliament, will assume the key portfolio of domestic trade and consumer affairs.

A leading banker, Amirsham Aziz, has been appointed a minister in the prime minister’s department, and will head the government’s Economic Planning Unit.

In other news, the United Malays National Organisation (Umno), the biggest party in the BN, said it will not punish former leader Mahathir Mohamad’s son for asking Abdullah to resign.

Mukhriz sent a letter last week to Abdullah and a few other Umno leaders, saying he should quit because of the party’s dismal election performance.

Hishamuddin Hussein, Umno’s youth wing chief, said the letter “was damaging because it was made public”.

But he said Mukhriz did not leak it. 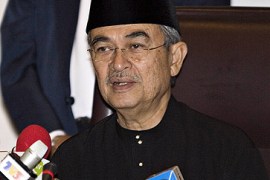 Malaysia PM: Lessons to be learnt

Abdullah vows to stay on despite losses as opposition looks to major policy reversals. 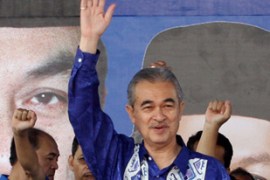 Abdullah sworn in as Malaysia PM 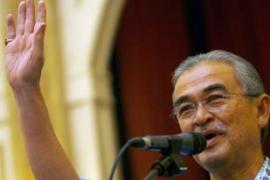 Abdullah has “no plans to resign” despite coalition’s worst ever election result. 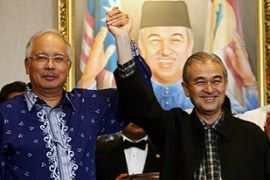