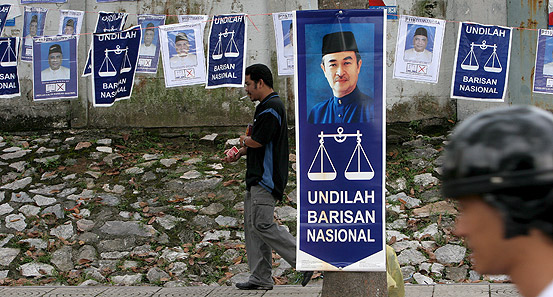 Malaysia‘s prime minister has said his government has important lessons to learn after it suffered heavy losses in general elections, slashing its parliamentary majority and reshaping the country’s political landscape.

Abdullah Ahmad Badawi, who assumed his second term in office on Monday, said the all parties in the Barisan Nasional (BN) coalition shared responsibility for its heaviest election losses since independence in 1957.

Nonetheless Abdullah said he continued to have the backing of all BN members, despite its dismal showing in the polls, and he rejected suggestions he should resign.

“We are collectively responsible,” he said immediately after taking the oath of office before Malaysia‘s king. “There are lessons to be learnt.”

And despite having fewer ethnic Indian and Chinese representatives in government, Abdullah reiterated his 2004 election promise to be the “PM for all Malaysians”.

But there are already signs that his government is already facing problems posed by the large opposition presence in national and state legislatures.

The policy, launched almost four decades ago, intended to uplift the Malay community to equal the economic status of other races in the country through preferential treatment in business, education and access to state contracts.

Sworn into office as chief minister of Penang on Tuesday, the DAP’s Lim Guan Eng said the NEP had bred “cronyism, corruption and systemic inefficiency”.

The new DAP-led Penang government is also mulling plans to re-introduce local government elections, which were abolished in the 1970s after the ruling party suffered major losses.

The opposition coalition comprises the predominantly-Chinese DAP, Islam-based PAS and Keadilan, which has close links with Anwar Ibrahim, the former deputy prime minister.

In Saturday’s polls, the 14-member BN coalition won 140 of the 222 parliamentary seats, with the opposition claiming victory in 82 constituencies.

It also lost four states – Penang, Kedah, Perak and Selangor – in addition to Kelantan, where PAS, which has been in power for almost 20 years, made an almost clean sweep.

Many reasons are being proffered for the ruling party’s loss of its two-thirds parliamentary majority, not least among them the arrogance demonstrated by government and party leaders in recent years.

Speaking to Al Jazeera, Raja Petra Kamarudin, who runs the popular Malaysia Today blog, says the coalition suffered massive losses due to a combination of factors.

He said people had different reasons to vote out the BN.

“Some did not like the waving of the keris (a Malay dagger) by Umno leaders. Some were unhappy with the increase in toll rates and prices of goods,” he said, adding the polls outcome were clearly a result of public anger.

“Some just hated Abdullah and Umno, but many, including ethnic Malays, took offence to racist remarks against ethnic Indians and Chinese … telling them to go back to their ancestral villages if they didn’t like living here anymore.”

Raja Petra said the internet also played a major role in shaping people’s opinion and keeping them informed of the goings-on in the government.

“As a result, the political tsunami gave the opposition close to half of the popular vote, which will hopefully see greater check and balance in the federal and state governments,” he said.

“People want a clean administration, a clean judiciary, a corruption-free police force and an equal distribution of wealth among all Malaysians, regardless of race or religion.”

Mary Magdalene Pereira, associate professor in policy studies at the Universiti Teknologi Mara in the state of Selangor, noted that for the first time, the votes did not go along racial lines, except in states like Kelantan and Penang which are predominantly Malay and Chinese respectively.

“The opposition would not have won so many seats or achieved this level of success without the support of Malay voters,” she told Al Jazeera.

Pereira said there was also a shift on the ground where, in previous elections, attendance at ceramahs (campaign rallies) rarely translated into votes.

“But this time it did. The opposition ceramahs attracted a multi-racial audience, many of whom including Malays were nodding in agreement with the points made on stage,” she said.

A reasonable conclusion to explain the protest vote – besides a desire for change – could be that Malaysians have matured, she said.

“There is a new expectation … where a Malay minister is willing to speak for other races, and vice versa.

“It may be a sign that we are moving towards a multi-racial political culture, a prospect that raises a lot hope for a lot of people,” added Pereira.

“The efforts of civil society organisations and individuals provided that extra push, which was spread by word of mouth and through online forums,” he told Al Jazeera.

“The high number of civil society candidates in this election clearly shows that.”

Wong, who is completing his PhD thesis on Malaysia‘s electoral system and party politics at the University of Essex in the UK, said many voters had given the opposition conditional support.

“We are crushing the traditional ideas of opposition politics. The trend has changed,” he said.

“People are demanding government accountability, transparency and equal treatment in all spheres of Malaysian life.

“Now there is a joint venture between the opposition and civil society to push for change, and we are already chasing our elected representatives on their election pledges.”