Merkel was the first German Chancellor to address the Knesset and about 1,000 guests, including Holocaust survivors, Jewish, Christian and Muslim religious leaders, former Israeli presidents and residents of Israeli towns targeted by rocket fire from Gaza, gathered to listen to her.

However, several Israeli politicians stayed away from the event, including one who said he could not bear to hear the language spoken by the murderers of his grandparents.

Al Jazeera’s Jacky Rowland in Jerusalem said that the speech was important and symbolic given that it came from a German leader as Israel prepares for its 60th anniversary.

Germany is a key trading partner and one of Israel’s staunchest allies, avoiding public criticism of the Jewish state even at times when others take Israel to task for its policies toward the Palestinians.

“Germany will never abandon Israel but will remain a true friend and partner,” Merkel said on Tuesday.

She also promised to be vigilant about Iran’s nuclear programme, saying that “if Iran were to obtain nuclear weapons, it would have disastrous consequences”.

Tom Segev, an Israeli author who wrote a book on how the Holocaust has shaped his country, said: “It is quite extraordinary that she radiates so much friendship and support for the government of Israel.

“The public discourse in Germany is much more critical of Israel than she is. I don’t really remember a time when Germany so wholeheartedly and uncritically stood by the government of Israel.”

Merkel did not meet Palestinian leaders during her three-day visit to the region but during her speech called “clearly and unequivocally” for the Hamas movement to stop rocket attacks from the Gaza Strip. 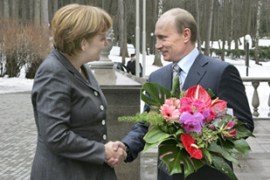 Merkel in Moscow for talks