Modest rebound
Chinese share prices closed down almost four per cent after Wen Jiabao, the prime minister, said taming inflation remained a top priority.
Elsewhere in Asia some markets managed to stage modest rebounds after the Dow Jones Industrial Average ended slightly higher overnight in New York at the end of a rollercoaster day.
Gold and oil prices were lower.
Tokyo closed up 1.5 per cent as bargain hunters emerged a day after the index plunged 3.7 per cent to a 31-month low.

Hong Kong was down 0.2 per cent in afternoon trade.

The federal funds rate, the interest that banks charge each other on overnight loans, currently stands at three  per cent, down from 4.25 per cent at the beginning of this year.

That was before global market turmoil in January prompted an emergency three-quarter-point cut on January 22 and a half-point move eight days later, the biggest reductions in a single month in more than a quarter-century.

Many economists believe the Fed will deliver another three-quarter-point cut or perhaps even a full one-point reduction at Tuesday’s meetings because Fed officials will not want to disappoint fragile financial markets.

These markets have watched Bear Stearns Cos, the fifth largest US investment house, suddenly be brought down by the equivalent of a run on the bank.

John Terrett, Al Jazeera’s correspondent in New York, said: “The management had to stave off a real head of steam, that they are going to be the next bank to fall.

“But the management of Bear Stearns said they were going to be OK two days before they ran out of cash.”

Terrett said that even Lehman Brothers were expecting to be back in line soon.

“Today, Lehman Brothers had to come out and say look, we have had a tough time like everybody else, but we’re going to be ok,” he said.

JPMorgan Chase & Co stepped in to announce it was purchasing Bear Stearns at a fire-sale price on Sunday in a deal helped along with a pledge that the Fed would supply a $30bn line of credit to back up Bear Stearns’ assets.

That offer over the weekend was the latest move by a central bank, including using procedures from the Depression era of the 1930s, to pump cash into the financial system.

In addition to providing support for the Bear Stearns sale, the Fed also announced on Sunday one of the broadest expansions of its lending authority since the 1930s, saying it would allow securities dealers for at least the next six months to borrow directly from the Fed.

That privilege, until now, had been confined to commercial banks. 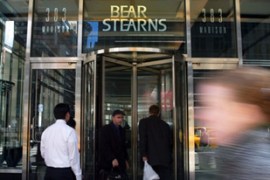 JPMorgan to buy crisis-hit US bank 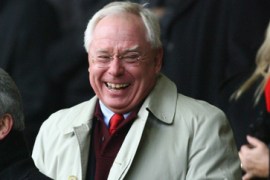 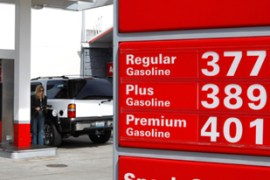 Fears mount over US economy 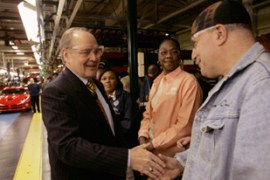 Struggling car manufacturer to shut most worldwide production in July.