The Chinese firm is offering about A$954m for the remaining shares.

Last month Midwest rejected an attempt by Sinosteel to win the company’s support for an agreed bid, prompting a hostile bid.


Tianwen Huang, the company’s president, said in a statement the offer would be highly attractive to Midwest shareholders.

A plan for a merger between Midwest and Australian iron ore producer Murchison Metals Ltd also collapsed last month after Murchison failed to win over Midwest‘s board.

Sinosteel, which is a Chinese government enterprise, already owns a 40 per cent interest in the Channar iron ore mine in Western Australia.

The foray by China, the world’s largest steel maker, into the Australian mining industry is driven by a growing appetite for imported ore to feed its mills.

“This is the first time a Chinese partner has actually gone in to take the whole company and maybe it’s an omen of things to come in the near future,” James Wilson, analyst at DJ Carmichael & Co, told Reuters news agency.

“Iron ore prices are rising fast and it’s in the best interest of Chinese companies to get into companies like Midwest as soon as possible.”

China has been eager to secure supplies of raw materials and energy to feed its economic growth. 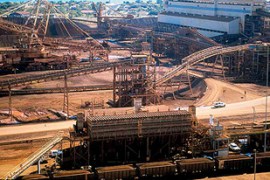