A day earlier an Austrian diplomat had arrived in Mali to secure the release of the holidaymakers.

An Algerian website also reported that al-Qaeda in the Islamic Maghreb was in talks with the envoy.

The Annahar website said the two Austrians were being held by Abdelhamid abu Zeid, an Algerian fighter, about 150km from Malian town of Kidal.

The Austrian envoy had reportedly started negotiations by telephone with the kidnappers, who are now demanding a ransom.

The al-Qaeda Organisation in the Islamic Maghreb had earlier demanded five prisoners in Algeria and Tunisia be freed in exchange for the Austrians.

reported on Saturday that the request was made through a letter addressed to Austria’s embassy in Algiers.
Austria’s foreign ministry confirmed it had received an ultimatum from the group.
The kidnappers had “made some political demands,” Launsky-Tieffenthal said.
“But they are demands that cannot be met by the Austrian side because they concern the release of prisoners in Tunisia and Algeria.”

Among the prisoners the group wanted released were former soldier Amar Saifi, known as El Para, or the The Paratrooper, a leading figure in the Salafist Group for Preaching and Combat (GSPC), which in 2006 allied itself to al-Qaeda.

Saifi, who was allegedly behind the 2003 abduction of 32 European tourists, was captured in Chad and returned to Algeria, where he is awaiting trial.

A statement posted on a website attributed to the group gave the Austrian authorities three days to comply, starting at midnight on Thursday.
“The state of Austria is responsible for the lives of the two hostages in the event of the expiration of the time-period and not responding to our demands,” the statement said, which included six photographs purportedly showing the two hostages.
Relatives reported the pair missing when they did not return from a holiday to Tunisia on March 1.
The two were last heard from on February 18 and failed to make a planned phone call to Ebner’s son on February 25.
The authorities began a search for the two tourists after Al Jazeera’s Arabic channel aired an audio tape, said to be from al-Qaeda’s North African branch, which linked the abduction of the consultant and nurse to the violence in Gaza.
The tape warned Western tourists to stay away from the Maghreb region of North Africa of which Tunisia is a part.
Source: Al Jazeera, News Agencies 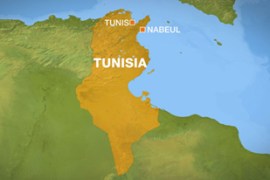 Al Qaeda claims they are holding two Austrians who went missing in February.