He said unemployment was low at 4.8 per cent and productivity was strong. But he acknowledged that petrol prices are up while grocery stores and housing values are down.

“He didn’t use the ‘R’ word, the word recession, because … the whole point of being president is that you talk up the economy. But he did come awfully close to it,” Al Jazeera’s John Terret in New York said.

Earlier, the US commerce department announced a 0.6 per cent drop in consumer spending for February.

The fall was the second big drop in the past three months, a pattern consistent with the onset of recession.

Bush praised the work of the Federal Reserve to boost the economy.

“Today’s events are fast moving, but the chairman of the Federal Reserve and the secretary of the treasury are on top of them and will take the appropriate steps to promote stability in our markets,” he said.

But Bush predicted an economic rebound once the impact of the Federal Reserve’s credit cuts and the recently passed economic stimulus package began to be felt.

He said Washington’s job was to foster enterprise and ingenuity to ensure the US economy was flexible enough to adjust to adversity and strong enough to attract capital investment.

Analysts were not as confident, worrying that the economy was being hit by multiple blows and noting that some of the problems, such as plunging home sales and mortgage defaults, were showing no signs of abating.

The dollar briefly dipped to 0.9986 francs in international trading on Friday before rising above parity again.

The dollar’s decline against the franc mirrors its fall against the euro.
The euro reached a new record of $1.5651 on news of financial woes at the US bank, Bear Stearns Cos. 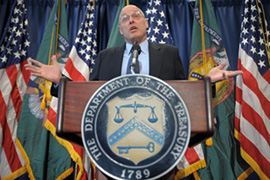 Crude oil prices hit all-time highs on Thursday with crude closing at $110.33 per barrel on the New York Mercantile Exchange.

Gold prices topped $1,000 an ounce on Thursday for the first time after the dollar’s plunge.

Gold, which is priced in dollars, becomes cheaper for buyers using other currencies when the US unit falls in value.

There was also the troubling news that Chrysler, the country’s third-ranked car manufacturer, announced it was shutting down operations for two weeks in July to boost productivity and efficiency.

The president’s Working Group on Financial Markets, led by Henry Paulson, the treasury secretary, put forward a broad blueprint of changes on Thursday aimed at correcting a variety of abuses such as mortgage brokers who pushed prospective buyers into loans they could not afford.

While the recommendations could help prevent a repeat of the current crisis, critics said the administration still needed to go much further to stave off an expected tidal wave of foreclosures in coming months.