Al Jazeera’s correspondent Tony Birtley travelled in secret to the jungles of northern Laos in search of the last fighters of the CIA’s “secret army”, a remnant from the days of the Vietnam War. This is his account of his journey.

The dead of night – a rendezvous on a dirt road on the fringe of a dense jungle.

I couldn’t see the faces of my guides, but I could see their guns and I could feel the apprehension as they ushered me into the undergrowth and the start of what would turn out to be an unforgettable journey.

There were six of them, all ethnic Hmong; a rugged, tough people used to harsh conditions. But a people, I was soon to discover, living in fear.

We hurried into the forest – not easy in the dark – down a steep slope, across a narrow bamboo bridge over a fast-flowing river, and then upwards.

When we talked it was in a whisper; when we walked we tried not to create noise. And we tried to avoid the danger, which they told me was all around.

The danger comes from the Laos army. They are everywhere, the guides told me and ambushes are common.

In the dark, with the occasional use of a torch, we weaved our way through the undergrowth.

The darkness creates fear and apprehension but it is also strangely comforting: if you cannot see the soldiers, then it is equally hard for them to see you.

The first five hours was straight up, no deviations, and no track. Sometimes clambering for something to hold and pull myself up, other times it was all I could do to stop from falling backwards.

No such exhaustion for the Hmong; this kind of hike was normal in this hilly highland terrain of northern Laos.

Five hours and numerous stops later we reached the peak of the hill and a chance to sleep for a few hours.

We walked for another two hours beneath the dense jungle canopy, then stopped for food.

The “food” was a plant root similar to a yam, tasting like dried potato and something I came to dread in the coming days.

After two days we reached our destination, Zu, meaning village in Hmong. Not so much a village, more a gathering of bamboo shacks. But the sight which greeted me could only have come from a Hollywood movie script.

Men, women and children were on their knees, hands together as in prayer. And there were tears, floods of tears.

I was the first outsider, the first Westerner, and the first foreigner they had seen in 32 years. For some it was the first time ever. Some of the weeping men cradled guns and had grenades on their belts.

I didn’t realise it then but my visit had taken on a significance I was not prepared for.

A Hmong man with a video camera filmed me. A woman dressed in traditional colourful Hmong clothes paused her sobbing and looked at me.

“Oh father, we are just widows. Our husbands, wives and children are lost. We are poverty stricken, please help us. We have no one to guide us,” she said.

Everyone was shouting out. Four young men were performing a welcome dance. A young fighter, grenade launcher on his back, grenades around his waste, played an out of tune guitar.

It was hard to grasp how desperate these people were, hard to understand the drama of the welcome, the depth of their hopelessness.

This would all become clearer in the coming days – more days than I intended to stay.

The group’s tears and groans continued. I felt uncomfortable putting my camera close to them to record their desperation, but realised that the world had to see this – it was the whole point of making such a journey.

Through a translator I asked if there were any women who had lost their husbands, killed by the government forces. Ten at the back stood up. 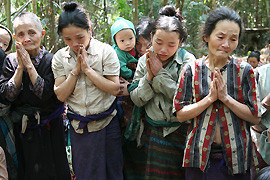 For three decades the Hmong have been
living a life of fear [Photo: Tony Birtley]

It was obvious these people had suffered a great deal, but their suffering has largely gone unnoticed.

Few before me knew what that the outside world was: the developments, the crises, technology, political leaders, foods, fads, fashion, the Oscars. Some things, perhaps, you can live without.

I gave one of the older fighters a copy of my Economist magazine. At first he smiled when he saw the colour advertisements, one for the biggest aeroplane in the world.

“So that’s what they look like. They are flying over our heads all the time.”

But the smiles soon turned to tears. I had never seen anyone cry over the Economist before.

“This is so sorrowful,” he said. “We would like to be civilised like these pictures. We escaped and hid ourselves until today. Living so poorly. The people in these pictures are dressed in beautiful clothes, but we just live like animals.”

They have lived cut off from the outside world for more than three decades, ever since the end of the Vietnam War.

Then 60,000 Hmong fought for America as part of the CIA’s so-called secret army. They fought the Vietnamese and Lao communists and attacked the communist supply routes through Laos that became known in the West as the Ho Chi Minh trail.

But when the Hmong army disbanded there was a new fight, with the newly installed communist government of Laos. Many fled, and many were killed.

It was a day before I had a chance to meet the leader, the spiritual head of not just this village but of the 7,000 people I was informed are still in the jungle hiding from the Laos army.

Vang Che Chi entered the village with a procession of young fighters and blessed me, asking the spirits to keep me safe. The Hmong are animists and worship nature.

The people look to the leader for guidance to solve their misery. The leader, though, was looking to me.

It wasn’t long into the interview when he dropped the bombshell: I would have to remain with them until their plight had ended. At first it seemed like a joke, before the seriousness of the situation became clear.

A series of phone calls on a satellite phone provided by Hmong diaspora confirmed that he was serious.

Their plight had gone on for almost 32 years and I began to think my departure from such a desperate place was going to be far harder than the journey to this remote corner of Laos.

As the hours wore on, my anger at the situation ebbed away, replaced by an understanding that desperation often leads people to do desperate things.

It was just unfortunate that such desperation included me.