In a statement read by Gates, Fallon said that the recent reports of a rift between himself and Bush “have become a distraction at a critical time and hamper efforts in the Centcom region”.

“Although I don’t believe there have ever been any differences about the objectives of our policy in the Central Command area of responsibility, the simple perception that there is makes it difficult for me to effectively serve America’s interests there.”

Fallon was in Baghdad on Wednesday as part of a surprise Iraq visit, the US military said.

He “is currently in Baghdad”, Lieutenant Michael Street, a US military spokesman, told the AFP news agency.

“Admiral Fallon’s job has been to help ensure that America’s military forces are ready to meet the threats of an often troubled region of the world, and he deserves considerable credit for progress that has been made there, especially in Iraq and Afghanistan,” he said.

Gates said he approved Fallon’s request to retire with “reluctance and regret”.
Al Jazeera: Is there a coming war on Iran?

Fallon: No, I certainly hope not. It is my belief that today, there is far too much talk of war and not enough talk about moving things forward in this region and taking care of the many needs of the people that I have seen through my visit here.

This constant drumbeat of conflict is one that strikes me as not helpful, not useful for the people, and I wish we could get moving to things that are more constructive for the region.

Al Jazeera: It’s good to hear this from a military man, yet politicians are saying different things.

Fallon: Well, everyone is saying something. There are comments and quotes everywhere. There are things that have been attributed to me when I came to this region to do this job six months ago. There were people who said, Oh we know the reason Fallon is coming … he’s a navy guy … he is used to flying carrier jets. And that must be the reason.

That is not the reason at all.

My view is that Iran, and the challenge that Iran presents in this region, is just of many things that when taken together, tend to cause conflict and tend to make people feel unsure, nervous, and anxious. This is not the atmosphere that I think we need to have in this region.

It’s been my experience throughout the world that people throughout, no matter where they are from, whatever region, despite there skin colour and religion, the vast majority of people want the same thing.

They want stability and security … they want a better life for themselves … . They want to be able to raise their children to have things that maybe they don’t have.

They really want live in peace with their neighbours. And that is, in fact, the mission of my command. It is to work with other nations in the region to set the conditions for peace and stability so the people can enjoy it.

It’s been my experience that to make progress in economic terms, political terms and development you have to have security and stability. That is one thing the military can do; we can help provide this atmosphere of stability.

But what good is it if you do not have the other developments to go with it?

On the other hand, if you do not have stability and security, I find it is mission impossible to build upon something.

Al Jazeera: There are claims that you said ‘the war on Iran will not happen during my time’. Does this mean that it will happen after you leave?

Fallon: Well, first of all I did not say that. But as I indicated to you in my first answer, it is certainly my hope and expectation that there is no war and that is what we ought to be working for. We ought to find ways in which we can get countries to sit together for the benefit of everyone involved. So whether now or in the future, war is not a good idea.”

Fallon, 63, who has served in the US navy for 41 years, became head of US Central Command (Centcom) in March 2007, replacing General John Abizaid, who retired.

He was previously head of US Pacific Command.
The Esquire article said Fallon’s reported disagreements with Bush over his policy on Iran could lead to his dismissal in favour of someone “more pliable”.
It also said that, were this to happen, it could be taken as a sign that Bush and Cheney intended to take military action against Iran “before the end of this year and don’t want a commander standing in their way”.
The Esquire article quoted Fallon as saying in an interview on Al Jazeera in September last year: “This constant drumbeat of conflict … is not helpful and not useful. I expect that there will be no war, and that is what we ought to be working for. We ought to try to do our utmost to create different conditions.”
But Gates dismissed the magazine’s claims as “ridiculous”.
He said Fallon had made the decision to retire of his own volition.
“I think this is a cumulative kind of thing,” he said in reference to the circumstances around Fallon’s decision to quit.
“It isn’t the result of any one article or any one issue.”
Philip Crowley, a former Pentagon spokesman and defence analyst at the Centre for American Progress, told Al Jazeera the resignation could also be a sign of tensions within the US military.
“Fallon has clashed with General Petraeus [the commander of US forces in Iraq] over the relative importance of Iraq as a mission and Afghanistan as a mission.
“There is tension here. We are out of good options in the Middle East. They can’t agree to disagree on where to put the weight of emphasis.”
Replacement named
Lieutenant-General Martin Dempsey, Fallon’s deputy at Central Command, was named to replace the admiral when he leaves at the end of the month.
Fallon’s departure comes as the Pentagon prepares to make recommendations on the scope of any possible reduction in US troop numbers in Iraq.
Gates said the review was “well advanced” and he was confident it would be completed before Fallon leaves, so it “will represent his views”.
The US and other Western powers have accused Iran of attempting to develop nuclear weapons, but Iran rejects the accusations, saying their programme is solely for peaceful purposes.
Source: Al Jazeera, News Agencies 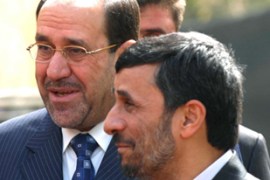 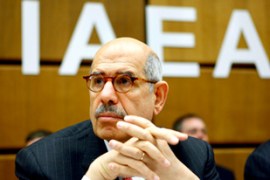