The second meeting came after the UN envoy’s return from Naypyidaw, Myanmar’s new capital, where he held talks with Senior General Than Shwe, the country’s ruling general.

Gambari had waited for days to see the reclusive Than Shwe and was expected to express international condemnation after security forces violently put down protests led by Buddhist monks.

It appears that last week’s military action has already largely succeeded in dispersing the crowds from the streets.

The crackdown is said to have left at least 13 people dead and more than 1,000 arrested.
Dissident groups, though, say up to 200 protesters were slain and 6,000 detained during the government’s crackdown last week.
Al Jazeera’s special correspondent in Myanmar, who remains annonymous for security reasons, reported on Tuesday: “Any vestiages of resistance from the demonstrators and protesters is probably over now… All the main shrines are open. There are fewer soldiers, significantly, on street corners.”
“It seems ike the backbone of the protesters has been broken for now,” he said.
Speaking about Gambari’s meeting with Than Shwe, he said: “State media has mentioned nothing about it. If you look in the state newspapers, you will see only condemnation of what angry rioters have done to the armed services.”
After his meeting with Suu Kyi, Gambari headed to the airport in Yangon, where he was expected to board a flight to Singapore, witnesses said.
‘Political opportunists’
The military lightened its presence in Yangon on Tuesday as the city remained quiet after last week’s demonstrations.

He accused “political opportunists” backed by foreign powers of trying to derail its move towards a “disciplined democracy”.
He blamed “neo-colonialists” – a reference to the US and other Western nations – for imposing economic sanctions and accused them of spreading disinformation that Myanmar’s government was committing human rights violations.

“Recent events make clear that there are elements within and outside the country who wish to derail the ongoing process [towards democracy] so that they can take advantage of the chaos that would follow,” he said.

The foreign minister said “political opportunists” exploited a small protest against the rise in fuel prices and “sought to turn the situation into a political showdown aided and abetted by some powerful countries”.
He made no mention of the deaths or injuries in the crackdown against the pro-democracy demonstrators.
Source: Al Jazeera, News Agencies 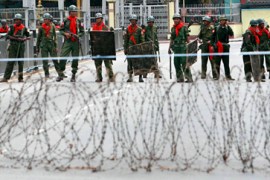 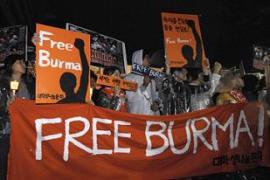