They also suggest that the rebels hoped to receive aid from Venezuela.

The revelations came as Venezuela moved to restore diplomatic relations with Colombia, reopening its embassy in Bogota and allowing Colombian diplomats to return to Caracas.

The Venezuelan government said that relations remained fragile after a Colombian cross-border military strike in Ecuador on March 1 triggered a crisis between the three countries and sparked fears of war.

The laptop was recovered in the Colombian commando raid kill Raul Reyes, a senior Farc commander.

Alvaro Uribe, Colombia’s president, said that a first set of letters culled from the laptop and released last week indicate Chavez had given $300m to the rebels.

He has previously acknowledged having communications with the Farc and defends those contacts as part of efforts to broker a humanitarian exchange of imprisoned rebels for dozens of Farc-held hostages.

The new documents refer to multiple meetings between the rebels and senior Venezuelan officials.

In a letter to Marulanda dated March 13, with no year given, Ivan Marquez, a member of the Farc’s top command, describes meeting General Henry Rangel Silva, head of the Venezuelan police intelligence agency, and a pro-Chavez congressman.

“We took advantage of the meeting to insinuate the importance of our secret, confidential relations or the establishment of a direct channel of communication” with Chavez’s government, Marquez wrote, saying the meeting was authorised by Chavez.

Another missive suggests that Ramon Rodriguez Chacin, the Venezuelan interior minister, sought to establish that direct communications channel during an October 3, 2007, conversation with Marquez.

In a letter dated that day, Marquez said Rodriguez suggested that Marulanda travel to Caracas for a three-day meeting with Chavez at the presidential palace.

The letters do not confirm any direct Venezuelan aid to the rebels, but in a message dated September 23, Reyes claims that Piedad Cordoba, a Colombian senator who helped Chavez broker the release of Farc hostages, received “100 million” of an unspecified currency from Venezuela for her home state.

One hundred million Colombian pesos is worth about $50,000.

Reyes also suggests that the rebels should not rule out the possibility of getting 250 million of the currency themselves.

Still fragile
The Venezuelan foreign ministry said on Sunday that the government will “re-establish the normal functioning of its diplomatic relations” with Colombia, saying that it was a “victory for peace and sovereignty”.

Nicolas Maduro, the Venezuelan foreign minister, said the countries will need to move with caution to avoid new fractures.

“We have to be very watchful and careful so the recuperation in political relations overcomes the current fragility,” he told Reuters news agency.
Maduro said the US, an ally of Colombia, was “close to achieving its goal that our countries entered belligerent conflict”.

The Colombian raid on the Farc camp in Ecuador had sparked the region’s worst diplomatic crisis in years, with Venezuela and Ecuador sending troops to their borders with Colombia.

The two countries also cut ties with Colombia, but following a handshake at a regional summit on Friday, Venezuela promised to withdraw its troops and quickly normalise relations.

Nicaragua, which also briefly cut relations with Bogota in support of Ecuador and over its own border dispute with Colombia, has also agreed to restore diplomatic ties.

But Ecuador‘s president has said his country will “take time” to restore diplomatic ties with Colombia.

Correa also said that it will be “difficult to recover trust” in the Colombian government. 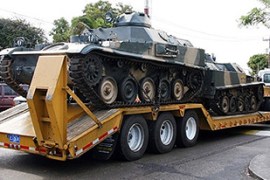 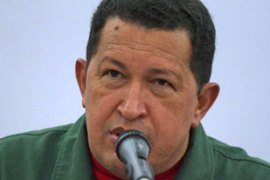 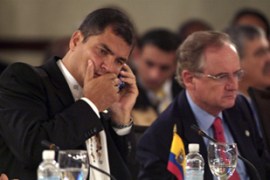