Sunni Muslim Saudi Arabia is a major supporter of the Sunni-led government in Lebanon which has been locked in a 15-month-old political standoff with an opposition led by Iranian-and-Syrian backed Hezbollah.
‘Conflict’ fear
Fouad Siniora, the Lebanese prime minister, has denied asking the US to deploy the warship USS Cole and two support ships amid the country’s continuing political deadlock.
Siniora reportedly summoned the US ambassador on Friday for an explanation.
Siniora said: “We did not request any warships from any party.”

He also stressed the importance of Lebanon’s independence and sovereignty “so that it will not become an arena for the conflicts of regional and international powers”.

Siniora said there are no warships in Lebanese territorial waters, except Lebanon’s small navy – made up of patrol boats – and the 12 warships belonging to a UN peacekeeping force.

According to Gordon Johndroe, a White House spokesman, Washington has had “regular consultations” with Siniora and other US allies in the region.

The US declined to say whether the decision to deploy the USS Cole was a show of force aimed at Syria, which it has accused of interfering in Lebanon.

Lebanon’s governing coalition and the Hezbollah-led opposition have failed to reach a deal over the election of a new president.

Nabih Berri, the parliament speaker, who is aligned with the opposition, has linked the deployment of the warships to Israel’s raids in the Gaza Strip.
“The target [of US warships] is Gaza. It is aimed to allow what must happen in Gaza to happen without anyone moving to support [the Palestinians],” he said.

“This is a real threat, not merely a muscle-flexing.”

Berri also said that the US military move was designed to focus attention on Lebanon “in order to cover up the massacres being committed in Gaza”.

“This [US] fleet comes to back Israel so that it can complete its plan,” he said.

Earlier, Richard Murphy, a former US ambassador to Syria, told Al Jazeera that the move was a sign that the US did not know what to do about Lebanon.
“It is gunboat diplomacy. I think it would be more useful for the US to find a way to engage with the conflicting parties in Lebanon.
“We have no dialogue with Syria and this is a moment for dialogue.”

Seventeen US sailors were killed in October 2000 when the USS Cole was attacked off the coast of Yemen by al-Qaeda fighters. 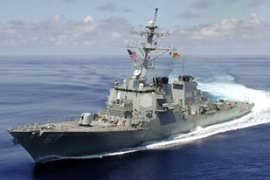 Fouad Siniora said to have met US envoy over decision as opposition sees Gaza link. 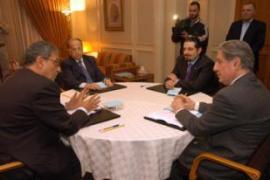 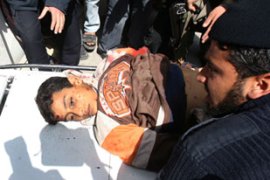 Children comprise a third of those killed in Israeli bombardment, medics say.