As part of Al Jazeera’s coverage of the US elections, correspondent Kimberly Halkett sat down with a group of five Ohio Republicans ahead of the March 4 presidential primary in the state to discuss the issues that are important to them.

The US residential nominating contests are nearly over and the Democratic race is still up for grabs.

But on the Republican side, it is almost certain that John McCain, the Arizona senator, will be the nominee to succeed George Bush.

Voter Rich Hillis, a business consultant, told Al Jazeera that the election “was all about whether or not I want the country to go into what I consider to be a Republican direction, which is less government, Or a Democrat direction which is more government and more intrusion into my life.”

Keeping America safe is one of McCain’s campaign themes.  He calls it “no surrender”.

And at every campaign stop, he promises Americans he will bring Osama bin Laden to justice.

The group agreed it was important, but unsure if it should be a priority for the US government.

“He has to be caught and brought to justice like Saddam Hussein was,” says Richard Fair, a  business consultant from the city of Toledo.

“But I just don’t know that if that could be the number one focus of America when people need jobs”.

Ohio has one of the highest unemployment rates in the country. The local economy is heavily dependent on manufacturing, especially the hard hit automobile industry.

The ‘war on terror’

But still, national security was on everyone’s mind.

When asked if there is a link between fighting terrorism and the war in Iraq, four out of five voters agreed.

However Kim Doucher, a lawyer, disagreed: “It’s not a knee-jerk, automatic link … in my view, the message that was sent was taking out the al-Qaeda camps in Afghanistan and that was an absolutely, justified show of force.”

“That was a mean, disgusting dog that needed to be wiped out and we had good justification to do it … [but] I don’t necessarily equate the incursion into Iraq the same way.”

College student Jesse Jones, who will be voting in her first presidential election said that all she has ever known is the war on terrorism.

McCain, a decorated former navy pilot who spent more than five years in prisoner-of-war camps in Vietnam, is a staunch supporter of the war in Iraq.

However his opponents in the Republican Party say he is too much of a moderate, that he is not conservative enough because of his positions on issues such as immigration reform and stem cell research.

And while the Republican voters Al Jazeera spoke to did not agree with all of John McCain’s policies, they said they would rally around the Republican nominee.

“I know a lot of people at my college, at my work, they look at John McCain and they see a future,” Jones said.

You can watch Kimberly Halkett’s ‘Meet the Voters’ on Al Jazeera English ahead of Tuesday’s primary. 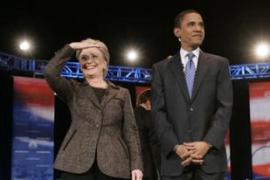 McCain and Obama spar over Iraq

Presidential hopefuls trade angry words over the role of al-Qaeda in the country. 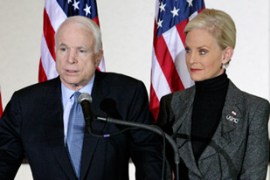 US Republican frontrunner denies allegations that he had an affair with a lobbyist. 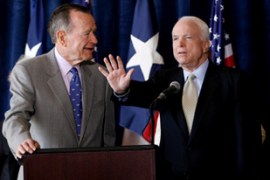